Professor Carl Friedrichs of the Virginia Institute of Marine Science was recognized with the J.J. Mehta Award during the 12th International Conference on Cohesive Sediment Transport Processes in Gainesville, Florida on October 23rd. Friedrichs accepted the award following his keynote lecture to conference participants.

The INTERCOH conference—now held every two years—provides a platform for scientists and engineers from around the world to share knowledge concerning the dynamics of muds and other fine-grained sediments. Better understanding of the erosion, transport, and deposition of these sediments—ubiquitous in estuaries and ports worldwide—is key for global efforts to improve water clarity, keep shipping channels open, and clean up chemical contaminants, which preferentially adhere to the tiny grains. 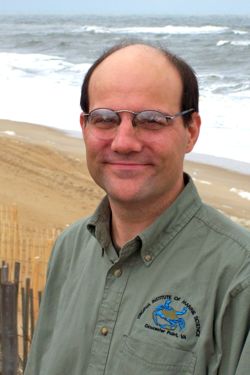 The Mehta Award, which carries a plaque and a prize of US $3,000, is named in memory of Jayant J. Mehta by his son Ashish J. Mehta—a professor in the Department of Civil and Coastal Engineering at the University of Florida and INTERCOH co-founder. The elder Mehta was a pioneer in the inception and growth of India’s petrochemical industry.

This is only the second time the Mehta Award has been given. The first honoree was Dr. Pierre Le Hir of Ifremer (French Research Institute for Exploration of the Sea) at the INTERCOH 2011 meeting in Shanghai, China.

The 2013 Mehta Award honors Friedrichs for his “outstanding achievements in research and teaching.” Dr. Larry Sanford, a professor at the University of Maryland and member of the Mehta Award Committee, says “The award especially honors Carl’s contributions to our understanding of how tidal flats form, the dynamics of gravity flows, and the behavior of sedimentary particles. His interests span a wide range of topics and often have a strong interdisciplinary flavor.”

Friedrichs says, “I’m honored to be recognized by my peers, and look forward to continued collaborations to better understand the unique properties and behaviors of cohesive sediments in coastal ecosystems worldwide.”

Joining Sanford on the Mehta Award Committee were professors Han Winterwerp of Deltares, Inc., an applied research institute headquartered in the Netherlands; and Bill McAnally of the Department of Civil and Environmental Engineering at Mississippi State University.

In their formal citation, the award committee writes

“Carl’s papers, many authored with his students and colleagues, have been frequently cited for novel observations on the transport of flocs in estuaries especially where turbidity maxima occur, and the physics of coastal cross-shelf sediment transport. In 2000, Carl started a new outreach and mentoring program called SEDIMENT (Science Education Inspired through MENToring). Through this program high school and undergraduate students pair with graduate students and faculty mentors in team research projects addressing interdisciplinary processes involving sediment dynamics, such as sedimentation in marshes and seabed mixing by benthic biota. Carl is a popular teacher who is able to convey fundamental learning of fluid flow and sediment transport mechanics.”

Sanford adds that “Carl’s often simultaneous use of field observations, analytical modeling, and numerical modeling effectively combines the strengths of these approaches and results in a broad perspective that specialists seldom attain. His commitment to including sediment-transport studies in real-time environmental observatories points the way to future advances in our field.”

Since arriving at VIMS in 1993, Friedrichs has published more than 70 peer-reviewed research articles, including seminal work on wave-supported gravity flows and the use of acoustic instruments to measure the velocity at which sedimentary particles settle to the bottom following suspension by tides, currents, and waves. He has also advised 18 graduate students, served on numerous other graduate student committees, and mentored many undergraduate and high school students interested in environmental research. He received a White House Presidential Early Career Award for Scientists and Engineers in 2000, and a National Science Foundation CAREER Award that same year. He is also the recipient of the Plumeri Award for Faculty Excellence from William & Mary (2010), an Outstanding Faculty Award from the State Council of Higher Education for Virginia (2008), and numerous other awards.

VIMS faculty have a long history of involvement in INTERCOH. Authors who published in the peer-reviewed proceedings from the first INTERCOH nearly 30 years ago include VIMS Emeritus Professor Maynard Nichols and present VIMS Dean and Director John Wells. VIMS Professor Jerome Maa hosted the 2003 INTERCOH on the VIMS campus in Gloucester Point, and VIMS Associate Professor Courtney Harris was a co-host of this year’s INTERCOH conference in Florida.

Previous INTERCOH conferences have taken place around the world: