Anyone who has ever struggled with knowing which plastic items they can or cannot place in their recycling bin will appreciate the complex task facing Professor Rob Hale and colleagues at the Virginia Institute of Marine Science. 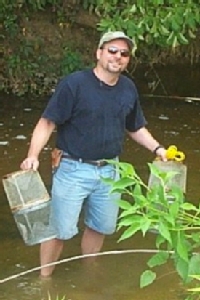 Hale began studying plastics in the 1990s after he and Marine Scientist Mark La Guardia discovered high levels of flame retardants in fishes from the James River. They quickly realized these compounds, added to household plastics to reduce their flammability, were somehow escaping their confines and entering the aquatic environment.

Subsequent groundbreaking research by Hale’s team and others revealed high levels of flame retardants in wastewater, e-waste sites, sewage sludges, soils, sediments, and indoor dust; as well as in minnows, earthworms, insects, birds of prey, deep-sea squid, and other organisms. Related research—based on concerns that these chemicals persist in the environment and tend to accumulate up the food chain—revealed health impacts in both wildlife and people, and led to worldwide limitations on the use of the most troublesome flame-retardant compounds.

Hale’s early experience with plastics research has now poised his team for a leading role in addressing the most recent worry about plastics in the environment—the growing concern about the effects of microplastics in the ocean.

To study plastics and plastic pollution, Hale says, “you have to embrace the complexity—plastics are not just one thing. They’re not just bottles, or bags, or cellphone cases, or the foam in your couch.” Hale and his team, including La Guardia, Drew Luellen, Matt Mainor, Ellen Harvey, and Masters student Kelley Uhlig, have analyzed products made from polyethylene, polyurethane, polyvinyl chloride, polystyrene, polypropylene, polyamides, and biopolymers; and these are just a subset of the thousands of plastic varieties in common use.

Adding even more complexity is that a single class of plastics can itself contain multiple variants. Polyethylene, for example, comes in at least 11 different “flavors.” Moreover, manufacturers infuse plastics with an array of additives designed to enhance their intended purpose—whether it be for flexibility, strength, durability, or other qualities.

In 2013, Hale received grants from NOAA’s Marine Debris Program and the EPA to look at how four different types of plastic and their additives behave under various environmental conditions. “When we started these projects,” he says, “We thought it would be pretty straight-forward—we’d go out and analyze what’s in the different polymers, then test those for toxic organic pollutants. But we quickly discovered that most of the plastics are a black box. You don’t know what’s in them.”

He adds that the plastics “probably had other chemicals in them that aren’t even on our radar screen. So if you observe a toxicological effect following exposure, you have a heck of a time figuring out what chemical or mixture is causing it."

The practical consequence of this complexity is that research into the environmental impacts of plastic pollution is just beginning. Meredith Evans, a doctoral student studying plastics in Hale’s lab, says “A lot of people don’t understand just how much research could be done in this area. We could work on this for years and years and still be pulling stuff out to ask questions about.”

As an example, Evans points to an experiment she ran in a class in Aquatic Microbial Ecology recently offered by VIMS professor B.K. Song, in which she placed different types of microplastics—polyethylene, polyvinyl chloride, polyurethane foam, and a biopolymer—into sediments collected from the floor of Chesapeake Bay.

“I looked at how the different types of plastic affected the microbial community,” she says, “and saw that some types significantly reduced microbial populations, which could affect the processing of nutrients like nitrogen. But if I had used a polyethylene with different additives, my results may have been very different. It’s a challenge when we’re in the field because there are so many possibilities for what could be out there.”

Another question, says Hale, is whether Evans’ results were due to the additives in the plastic, or to the plastic itself. “The devil is in the details,” he says, “what kind of PVC it is, and what’s in the PVC, might actually control the outcome.”

“That always surprises people,” adds Evans, “how difficult it is to determine the type of plastic and the different compounds in it. I often hear ‘All plastic is the same,’ but it’s really not. The complexity makes it a very interesting and important research area.”

Moving forward, Hale and Evans’ immediate plans are to study plastic pollution in two far-spread environments—coastal Alaska and St. Helena island in the South Atlantic. Other opportunities—several related to electronic manufacturing and recycling sites in China—lie on the horizon.

Evans plans to head to Alaska in July, in a collaboration with W&M professor and immunologist Patty Zwollo. “There’s a very remote spot that gets a lot of plastics washing in,” says Evans. “It’s a unique study site because there are no other pollutants in the area besides plastic, so we can isolate the effects of plastic on that ecosystem. That’s really cool.”

“If the whale sharks are eating microplastics,” says Hale, “one sure way of showing that is to look at their poop.” “As you might expect,” he adds, “that’s not the easiest thing in the world, particularly when you’re dealing with a pelagic species that shows up kind of opportunistically.” To surmount that challenge, Hale and his aquarium colleagues hope to collect poop not only in nature but in a much more accessible locale—the tank that holds the Aquarium’s whale-shark pair.

“If you’re concerned about toxicological impacts with a contaminant,” says Hale, “ it’s probably going to occur where the levels are highest. When they make plastics, the additives are present in concentrations up to 10% by weight—a ludicrously high number compared to what might be on a bit of microplastic, which is measured in low parts per millions.”

The point, he says, is not that whale sharks or other organisms will experience no ill effects from ingesting microplastics in the ocean. It’s that whale sharks in an acrylic-walled aquarium may be exposed to much higher concentrations of flame retardants than their wild cousins—just like people are likely ingesting much higher concentrations of flame retardants from microplastics in household dust than by eating seafood in which these materials might have accumulated. LaGuardia is currently analyzing legacy and emerging flame retardants in household dust in collaboration with University of Cincinnati and NIH.

A realist, Hale recognizes that humans are not going to stop using plastics anytime soon. Global plastic production has increased by more than 600% since 1975, and the amount of plastic entering the world’s oceans is projected to increase 10-fold by 2025. But he does think there are steps we can take to minimize their environmental impacts. “We have to re-think how we make, reuse, and dispose of these materials,” says Hale.

A better understanding of the environmental effects of microplastics and their additives is also key. “Back when I started,” says Hale, “people thought that plastics on the beach just sat there, and if they broke into pieces we didn’t have to worry about them anymore.’ We thought plastics were simple. But now we realize they are not.”

“Public concern," adds Evans, “often focuses on the visible plastic—like a six-pack ring wrapped around a turtle—but microplastics may well be more harmful.”

“Microplastics exhibit greater surface areas and environmental reactivities than larger plastic pieces and are easily transported,” says Hale. “Their small size allows them to be ingested by many types of organisms—from whales to humans. So for us it is a natural thing to study how water might affect transport and bioavailability from microplastics. That’s one of our major goals moving forward.”