Scientists have identified many benefits for restoring oyster reefs to Chesapeake Bay and other coastal ecosystems. Oysters filter and clean the water, provide habitat for their own young and for other species, and sustain both watermen and seafood lovers.

A new study co-authored by Professor Roger Mann of the Virginia Institute of Marine Science adds another item to this list of benefits—the ability of oyster reefs to buffer the increasing acidity of ocean waters.

The study, “Ecosystem effects of shell aggregations and cycling in coastal waters: An example of Chesapeake Bay oyster reefs,” appears in Ecology, the flagship journal of the Ecological Society of America. It is co-authored by George Waldbusser of Oregon State University and Eric Powell of the Haskin Shellfish Research Laboratory at Rutgers University.

Concerns about increasing acidity in Chesapeake Bay and the global ocean stem from human inputs of carbon dioxide to seawater—either through the burning of fossil fuels or runoff of excess nutrients from land. The latter over-fertilizes marine plants and ultimately leads to increased respiration by plankton-filtering oysters and bacteria. In either case, adding carbon dioxide to water produces carbonic acid, a process that has increased ocean acidity by more than 30% since the start of the Industrial Revolution.

A more acidic ocean concerns marine-life experts, who cite its corrosive effects on the calcium carbonate shells of oysters, clams, and other mollusks, as well as its possible physiological effects on the larvae of fish and other marine creatures. At current rates of increase, ocean acidity is predicted to double by 2100.

The Ecology paper reports on the research team’s efforts to calculate past and present shell budgets for Chesapeake Bay, with a goal of estimating how effective healthy oyster reefs might be in moderating ocean acidity, and whether today’s depleted reefs can withstand future acidity increases.

“Oyster shells are like slow-dissolving TUMS in the belly of Chesapeake Bay,” explains Mann. “As ocean water becomes more acidic, oyster shells begin to dissolve into the water, slowly releasing their calcium carbonate—an alkaline salt that buffers against acidity. An oyster reef is a reservoir of alkalinity waiting to happen.” 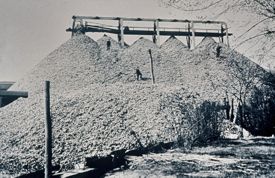 The team’s calculations suggest that in 1870—before people began large-scale harvesting of oyster meat and shells from the Chesapeake—the amount of oyster shell exposed to Bay waters was more than 100 times greater than today, with an equally enhanced capacity to buffer acidity.

“Our data show that that oyster reefs likely played a key role in the pH budget of pre-harvest Chesapeake Bay,” says Mann. “The amount of carbonate in the shells of living oysters at that time was roughly equal to the total amount of carbonate dissolved in the modern Bay. If similar numbers of oysters were alive today, they could take up about half of the carbonate that rivers currently carry into Bay waters.”

Many people are familiar with the notion that the cloudy waters of the modern Bay would be clearer if over-harvesting and disease hadn’t drastically reduced the oyster population and its capacity to filter particles from the water. Mann says, “Our study suggests a similar loss of ecosystem function, but in terms of buffering acidity rather than improving water clarity. This has significant ecological ramifications, but hasn’t really been on anyone’s radar screen.”

Returning oyster shells to Bay waters—a practice that began in earnest in the 1960s to restore reefs for food and filtering—has helped buffer acidity in the Bay, but to nowhere near historical levels. Waldbusser's estimate of a shell budget for Maryland waters shows that shell replenishment through dredging and restaurant recycling has made up for about half of the 200-million plus bushels of oyster shell lost to harvest between 1880 and 1960, still leaving the Maryland portion of the Bay 100 million bushels shy of its pre-harvest resource. 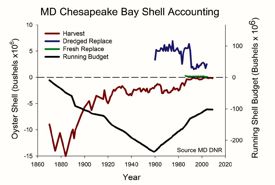 The study by Mann and his colleagues estimates that oysters now contribute only 4% to buffering of acidity baywide, whereas they were responsible for 70% of all baywide buffering in 1870.

Looking towards the future, the team’s concern is that oyster reefs in the modern Bay—fewer and smaller than their pre-harvest counterparts and featuring smaller oysters—may be unable to keep pace with the increasing acidity of Bay waters.

“The shells of dead oysters degrade rapidly in estuarine environments,” says Mann, “with a half-life of only 3 to 10 years. For a reef to maintain the structure needed to support future generations, oysters must grow fast enough and large enough so that their rate of shell production exceeds that of shell degradation.”

The optimal rate of shell addition, says Mann, “occurs with larger, older animals that contribute more shell carbonate per mortality event.” But, he adds, “the onset of disease has unfortunately reduced the life span and maximum size of Bay oysters, thus compromising the shell budget.”

“What’s worrisome about this is that the shell reservoir is getting smaller and smaller,” says Mann. “Could we reach a tipping point where increasing acidity so overwhelms the decreased buffering capacity of dead shells that it then begins to significantly affect live oysters, further limiting their ability to add shell to the alkalinity buffer? If so, we could end up with a negative feedback loop and a worst-case scenario.”