When beachgoers gaze seaward, most see an apparently uniform expanse of water stretching to the horizon. 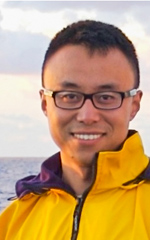 For Dr. Donglai Gong, the view is very different. Gong, a new faculty member at William & Mary’s Virginia Institute of Marine Science, is a physical oceanographer who uses gliders and moorings to study the movement and properties of coastal waters. One focus of his research is the mid-Atlantic Bight—the concave arc of water between Cape Hatteras and Cape Cod that includes the mouths of Chesapeake Bay, Delaware Bay, and the Hudson River.

Gong’s doctoral research reveals that this area is a dynamic system in which parcels of water with different salinities, temperatures, oxygen levels, and densities flow and swirl along the continental shelf, influencing everything from weather and climate to the dispersal of fish and shellfish larvae, the transport of pollutants, and the commercial and recreational activities of the area’s 50 million coastal residents.

Gong arrived at VIMS in October 2012 after a two-year post-doctoral fellowship at the Woods Hole Oceanographic Institution. He earned his Ph.D. at Rutgers University in 2010, with a dissertation entitled “Mesoscale Variability on the mid/outer NJ Shelf: Effects of Environmental Forcing on Circulation, Hydrography and Transport."

VIMS Associate Professor Courtney Harris, search committee chair, says “Donglai brings expertise in cutting-edge technology to VIMS, and has an excellent teaching record. His research experience in the Mid-Atlantic Bight and off of New Jersey will readily transfer to studies of Virginia’s coastal waters.”

Before earning his Ph.D., Gong received a Master’s degree in physics from the Massachusetts Institute of Technology, with a thesis entitled “Quasar spectroscopy in UV and X-ray: probing the intergalactic medium using helium and oxygen.” He says his shift from physics to marine science reflects a desire to connect with the world and address humanity’s most pressing challenges.

“I’ve always liked space and aircraft, and as a kid wanted to be an astronaut or a pilot,” says Gong. “My career plan originally was to go into astrophysics or cosmology. It's a really fascinating field with some very cool research. But as I advanced further, I felt I needed a stronger connection to the everyday world, something that I can touch, see, and feel. I also started to learn how to sail. Being on the ocean, experiencing its freedom and beauty and sharing that experience with others, made me realize that the ocean is my way to engage and connect with the rest of the world.”

At VIMS, Gong looks forward to continuing his studies of the Mid-Atlantic Bight. “The question I ask as a physical oceanographer,” he says, “is ‘How does this region change in response to different kinds of physical forcing?’ The Bight has very complex topography—a number of offshore canyons and a shoreline that runs east-west in some areas and north-south in others. I’m interested in knowing how the properties and movement of the water affect the biology, the chemistry, the geology, the fisheries, and all the human aspects related to that.”

Gong can trace studies of the Mid-Atlantic Bight all the way back to pioneering oceanographer Henry Bigelow. But rather than relying on the Niskin Bottles and drifters used by Bigelow and other 20th-century scientists, Gong employs the most modern of oceanographic research tools—unmanned gliders.

Gliders are torpedo-shaped autonomous underwater vehicles that combine changes in buoyancy with a pair of fins to propel themselves through the water. Gong says their most valuable feature is the ability to perform extended missions over a vast region.

“A glider can be out for a very long time,” he says. “We can deploy them anywhere from a few weeks to a few months; the current designs are pushing a year. You can put a variety of sensors onboard—CTDs, acoustic and optical sensors, nutrient analyzers—then beam the collected data wirelessly via satellite to a ship or shore-based lab. When the glider is at the surface its tail pops out of the water—you inflate an air bladder in the back—and it can then talk in real-time from anywhere in the world. You could deploy a glider in the Arctic and communicate with it—tell it where to go, how often to collect data—from right here at VIMS.”

Gong has in fact used gliders in Arctic waters, during a two-year project in the Chukchi Sea along Alaska’s North Slope as part of his post-doctoral research. He is now analyzing those data for publication, focusing on how water masses change as they move from the Pacific into the Arctic through the Bering Strait. Arctic waters are a hotspot of current oceanographic research in light of the area’s rapidly warming climate and disappearing sea ice.

Harris says that Gong’s interest in Arctic research “complements current research programs at VIMS that focus on high-latitude environments, and provides an exciting link between specialties. His experience in the Arctic will help VIMS better address climate change in polar regions and its ultimate effect on local sea-level.”

Before his Arctic research, and nearer his new home in Gloucester Point, Gong used data from gliders and moorings to address a puzzle in the oceanography of the Mid-Atlantic Bight—what he calls the “Salt Budget Dilemma.” Simply put, the Bight waters are saltier than they should be according to the estimated difference between precipitation and evaporation. The effect becomes more pronounced further south in the lower Bight, nearer Chesapeake Bay.

Gong approached this puzzle by studying the factors that control one of the Bight’s key oceanographic features—the “shelfbreak front.” This fluctuating boundary separates the relatively fresh and cold waters of the continental shelf, highly influenced by river input, from the warmer, saltier waters seaward of the continental slope.

“The front is a complex, three-dimensional feature,” says Gong. “Its shape and structure change both seasonally—with major shifts between summer and winter—and to a lesser degree every few days to weeks.” His research reveals that these changes are driven by winds, the oceanic pressure gradient, movement of a sub-surface “cold pool,” and the influence of eddies and rings that spin off the Gulf Stream.

Gong says that the eddies—along with tropical storms and nor’easters—may help explain the Bight’s unbalanced salt budget. “Eddies or rings can bring warm, salty water masses into the Bight,” he explains. “Storms can then help entrain the salt from these intrusions onto the shelf. All these processes—shifts in the front, eddies, and storms—have implications for cross-shelf exchange and its effects on plankton and larvae and fish.”

At VIMS, Gong plans to approach his studies of the Mid-Atlantic Bight from both directions—the deep sea and shallow estuaries like Chesapeake Bay.

“I’d really like to look at submarine canyons,” says Gong. “Studies from the West Coast suggest that canyons play a big role in facilitating the exchange of materials, organisms, and nutrients across the shelf break.” He has already submitted a proposal to the National Science Foundation to place gliders and moorings near the Hudson Canyon, off Long Island, and has eyes on the Norfolk Canyon off Virginia as well.

As for Chesapeake Bay, Gong hypothesizes that warm water from Gulf Stream eddies and rings can occasionally move towards the Bay mouth, and wonders how that might affect the Bay and its marine life. “There are some interesting questions to be explored,” he says. “I plan to design some studies to focus on this coupling between the slope, the shelf, and the estuary.”

Gong plans to study Chesapeake Bay and Virginia’s coastal ocean from yet another angle as well­—that of a sailor. “Sailing is still my passion,” he says, “and I hope to do more of it here in Virginia.”