A large crowd of dignitaries and friends helped dedicate the new seawater facility at the Virginia Institute of Marine Science’s Eastern Shore Laboratory on Saturday, with William and Mary President Taylor Reveley praising “a truly unique facility” and recognizing its promise of “vital contributions to the health of Chesapeake Bay, the coastal ocean, and Virginia’s fisheries.”

VIMS Dean and Director John Wells says the facility will “bring the Eastern Shore Lab to a new level of scientific excellence and create opportunities for faculty and students to expand VIMS’ mission of research, education, and advisory service.” The ESL serves as a field station for VIMS faculty and graduate students, undergraduates from William and Mary and other colleges and universities, local student interns, and for visiting scholars and students from across the U.S. and abroad.

The uniqueness of the 7,597 square-foot building is perhaps best described by a phrase from the world of real estate—“location, location, location.” The facility, in the seaside village of Wachapreague, is located just a few feet from the edge of a coastal inlet whose quiet waters are as salty as the nearby Atlantic Ocean. 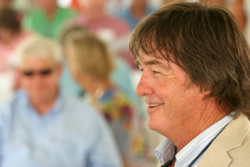 Dr. Mark Luckenbach, VIMS professor and ESL Director, says “Our new facility is unique in its easy access to clean, high-salinity seawater.” That access—provided by up to 8 pumps at a top rate of 1,840 gallons per minute—allows researchers to rear, maintain, and observe marine organisms under conditions that mimic those of the coastal and open ocean.

The new facility is already busy with research projects, including studies of how changes in fishing gear might reduce the inadvertent capture of sharks and endangered sturgeon, how hearing and vision differ among various kinds of Virginia sport fishes, and how predation impacts the survival of juvenile scallops. The latter study is part of a broader effort to restore bay scallops to nearby coastal lagoons, which once supported a valuable commercial fishery for the species. The ESL is already well known for its groundbreaking work in hard clam aquaculture, now a mainstay of the Eastern Shore economy.

VIMS researcher Dr. Rich Brill—a noted expert in the physiology of fish and sharks who is also affiliated with the National Marine Fisheries Service—is one of the new lab’s first users, and a big fan. “It’s the physical location and proximity that set it apart,” he says. “The sharks are right here, the lab is right here, the seawater’s right here. If you’re working with sharks or other coastal and open-ocean species, this is the place to be.” 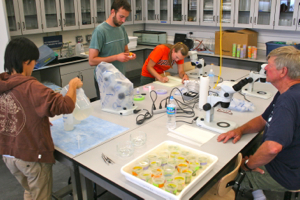 The new facility also provides resident and visiting students with an enhanced opportunity for hands-on study of live organisms. Wells says “In addition to its research capabilities, the new lab provides space that’s been purpose-built for instruction and discovery by students of nearly all ages. It combines research and teaching under one roof, ensuring that our faculty and students continue to make a positive impact on Virginia and the world.”

Joining Wells and Reveley as dedication speakers were Nicholas DiPasquale, Director of the Environmental Protection Agency’s Chesapeake Bay Program Office; Delegate Lynwood Lewis of Virginia House District 100; Michael Maul, Associate Director of the Virginia Department of Planning and Budget; and Dennis Liberson, a member of the VIMS Council and Secretary of the Board for the William and Mary Board of Visitors who read a letter from U.S. Senator Mark Warner.

The new seawater laboratory presents a clear integration of form and function, with an emphasis on providing flexibility for current and future users. The two main rooms—a 2,888 square foot research lab and a 1,528 square-foot teaching lab—are awash with overhead “drop-downs” to supply seawater and electricity directly to the aquariums, tanks, and instruments needed for a researcher’s specific project. High ceilings allow air movement to minimize condensation and provide natural cooling, while south-facing windows bathe the lab in ambient light. Smoothed concrete floors with built-in drains allow easy cleanup of water spilled during lab work or in the case of a leaky line or tank.

“The hallmark of this place is that it is really flexible and includes multiple redundancies,” says Luckenbach. “That allows us to accommodate a wide variety of researchers, study animals, and scientific equipment.” 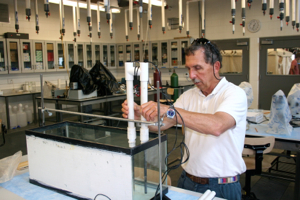 “We turn on the pumps we need,” says Luckenbach. “We can heat or chill water to whatever temperature people want for their particular experiment, we can filter it down to ultra-pure levels and sterilize it with UV light, but when we do that, it’s at the location of the individual experiment.”

Luckenbach notes that this approach is more affordable—both for the lab and visiting researchers—and also provides the operational resiliency needed at a relatively small and isolated field station. “When a big pump, chiller, or backup generator breaks down—you can’t fix them easily or cheaply,” he says. “So we use small, portable units instead. The nice thing is, if we can’t fix a broken chiller, we can replace it really quickly with a backup or buy a new one. That keeps our animals alive and let’s our researchers get back to work right away.”

This redundant and flexible approach developed out of necessity during Luckenbach’s tenure at the lab, and he’s convinced it’s the right strategy. “In my 22 years of being here, the longest we’ve been without seawater is 4.5 hours,” he says, “and we’ve never lost any animals to a lack of seawater.”

Luckenbach notes that the approach is also particularly suited to the seasonal nature of the field station, which sees heavy usage in the warmer months, but can quiet considerably during winter. “In February,” Luckenbach says, “we might just need to fill a tank or two, so we can run just one of our pumps and save both electricity and money.”

The new facility's seawater pumps are most likely to be running at full capacity during spring and summer, when the Eastern Shore Lab becomes a hive of activity for researchers, as well as students of many grade levels and from around the globe. 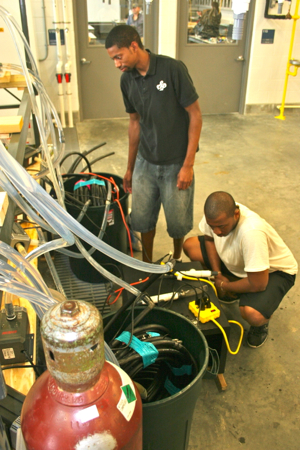 At the higher-education level, the lab hosts graduate students from the School of Marine Science at VIMS, undergraduates enrolled in the College of William and Mary’s new marine science minor, summer interns from the Eastern Shore, and students from more than 20 outside colleges and universities, including a group of up to 40 students enrolled in the recently expanded exchange program with the School of Ocean Sciences at Bangor University of Wales.

“As an instructor,” he adds, “what really struck me was how much walking space there is between the lab tables. I’ve spent a lot of time in teaching-labs, trying to squeeze between stools to help students. Now there’s room to teach students one-on-one. Little details like that are the kinds of things that help make this lab so user friendly.”

Planning for the Future

Brill, who served on the design committee for the new lab with Luckenbach, Director of Facilities Management Richard White, Project Manager Ron Herzick, ESL Building and Grounds Supervisor Reade Bonniwell, and then VIMS Finance manager Carolyn Cook, says “Our philosophy was ‘Don’t design it just for the people that are here now, design it for the people who will be here in 20 years.’ We want it to work for everybody, and for a long time.”

Part of the planning process for long-term utility was consideration of coastal flooding and sea-level rise. As with other seaside property along the Atlantic coast, the lab’s proximity to the ocean comes at a cost—the increasing risk of flooding during hurricanes, nor’easters, and extreme tides. The land on which the new lab was built lies just three to four feet above mean sea level, a position that led to frequent flooding of the site’s previous structures—four 19th-century oyster-shucking houses that had served as the ESL’s seawater labs since their purchase by VIMS in 1972.

The conditions in those buildings “were awful,” says Luckenbach. “They were essentially open to the elements. The wind blew through, the bugs came in, there was very little space—and they flooded.”

Herzick, who supervised the building project in collaboration with VIA design architects, pc and NASON Construction Company, explains that the ground at the site was graded to 6 feet above sea level, with the foundation of the new structure adding another 3 feet to bring the elevation of the interior floor to 9 feet. 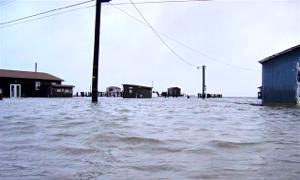 The additional elevation needed to exceed the 12-foot level of the predicted 100-year flood was gained by constructing the bottom 5 feet of the building as a waterproof envelope, with walls of 10-inch-thick poured concrete and entry doors that can be covered with watertight panels when a storm threatens. All told, the building is designed to withstand floodwaters up to 14 feet above mean sea level. All exterior power outlets and light fixtures rest above this height.

Wells emphasized the seawater facility’s forward-looking design in his concluding remarks to the dedication audience, saying “We deeply appreciate that the Governor and General Assembly continue to invest in VIMS so that we can achieve new heights in our service to the Commonwealth and the nation. This unique, cutting-edge facility is a key incarnation of that commitment. It is the centerpiece of the future of our Eastern Shore Lab.”