Results from the latest Blue Crab Winter Dredge Survey indicate the female spawning stock in the Chesapeake Bay remains healthy, but a low abundance of juvenile crabs may mean a lean harvest this fall. 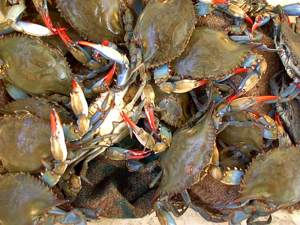 Historically, one year of below-average recruitment does not necessarily indicate the population is declining, but Bay managers will be keeping a close eye on these juveniles and their recruitment into the blue crab fishery this fall.

The survey has been conducted annually since 1990 by the Virginia Institute of Marine Science and Maryland Department of Natural Resources. Survey scientists employ traditional crab dredges to sample blue crabs at 1,500 sites throughout the Chesapeake Bay from December through March. By sampling during winter when blue crabs are buried in the mud and sedentary, scientists can develop, with good precision, estimates of the number of crabs present in the Bay.

“The low numbers of juvenile crabs captured in the survey are driving the reduced total abundance observed in 2021 compared to previous years,” says Virginia Marine Resources Commissioner Steven G. Bowman. “However, we have had robust management measures in place since 2009 and they are doing exactly what they are designed to do—protect and sustain a high spawning stock biomass and control fishing mortality. Given the survey results, we will not be expanding the crab fishery this year,” stated Bowman.

Professor Rom Lipcius, who oversees the Blue Crab Winter Dredge Survey at VIMS, adds "The spawning stock remains robust, and is indicative of a resilient blue crab population fostered by effective management. The low juvenile abundance is not unexpected, given high interannual variability due to environmental conditions beyond the control of management."

Lipcius notes that the 2020 results warrant "no further management actions for now, though management could impose new regulations later in the year if juvenile abundance remains low."

The abundance of spawning-aged females increased 12% from 2020 and ranked the 10th most abundant in the survey’s 32 years. The estimated 158 million spawning females remains well above the overfished threshold of 72 million crabs, but below the target abundance of 196 million crabs. The threshold and target were recently revised based on results from the 2017 update to the blue crab stock assessment. Adult females are the cornerstone of the joint Virginia-Maryland blue crab management program that began in 2008, when a fisheries management framework was established to conserve the spawning stock. Females can spawn an average of three million new crabs each brood and release about three broods per year.

Tempering this promising increase in female spawners, is the total abundance of 282 million crabs—a 30% decline in crab abundance compared to last year. This decline in the overall abundance is due primarily to a 54% decline in juvenile abundance. 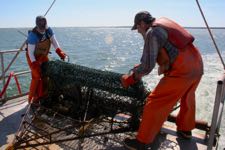 “We are disappointed and concerned in the low abundance of juveniles,” says Pat Geer, Chief of the VMRC Fisheries Management Division. “These juveniles traditionally begin to recruit to the fishery by August, and although the numbers are of concern, they are not without precedent. Juvenile crab recruitment naturally fluctuates from year to year and can be impacted by wind, tide, weather, and predation by other species.”

The Bay-wide crab population continues to be managed successfully by evaluating the annual abundance of the adult female spawning stock and fishing mortality. The former provides information on whether the stock is overfished and the latter determines if overfishing is occurring. Low abundance, high fishing pressure, and poor harvest in the early 2000s resulted in Bay states implementing a 38% reduction in catch and effort starting in 2008. Since that time, the spawning stock biomass has only dropped below the 72 million-crab threshold once (in 2014) and has otherwise remained healthy. In contrast, the inter-annual variability associated with juvenile crab abundance make the metric difficult to use for management.

“We will watch the spring and summer results from surveys such as the VIMS Trawl Survey closely to see if their numbers corroborate those from the Winter Dredge Survey. If juvenile estimates remain low, it may be necessary to examine management actions this fall,” says Geer.

The preliminary Bay-wide commercial crab harvest in 2020 was just under 37 million pounds. This represents a 33% reduction compared to 2019 and 27% below the 10-year average. Virginia’s commercial crab harvest was 21 million pounds, a decrease of 25% from harvest in 2019. Impacts from the COVID-19 virus played a major role in the reduction of harvest in 2020 as many markets were reduced (restaurants) or eliminated (picking houses), though the retail market stayed strong.

The Chesapeake Bay Stock Assessment Committee (CBSAC) held a working meeting earlier this week to discuss the results from the 2020-21 Winter Dredge Survey, which will be published in a the full CBSAC Annual Report this June, and to provide insight on what conditions may have influenced the 2021 crab abundance. In the coming weeks, the Bay jurisdictions will meet with their respective blue crab advisory panels and commissions to establish crabbing regulations for the upcoming management season that begins in July.