Preliminary results from an ongoing long-term survey conducted by researchers at the Virginia Institute of Marine Science suggest another average year class of young-of-year striped bass was produced in Virginia tributaries of the Chesapeake Bay in 2021. The 2021 year class represents the group of fish hatched this spring that will grow to fishable sizes in three to four years.

The VIMS Juvenile Striped Bass Seine Survey recorded a mean value of 6.30 fish per seine haul in the Virginia portion of the Chesapeake Bay. The 2021 value—which scientists call a recruitment index—is similar to the historic average of 7.77 fish per seine haul and represents the 9th consecutive year of average or above-average recruitment in Virginia waters. Although there can be considerable variation in striped bass recruitment among years, the indices observed in recent years suggest that abundance of juvenile striped bass in Virginia has been relatively stable. 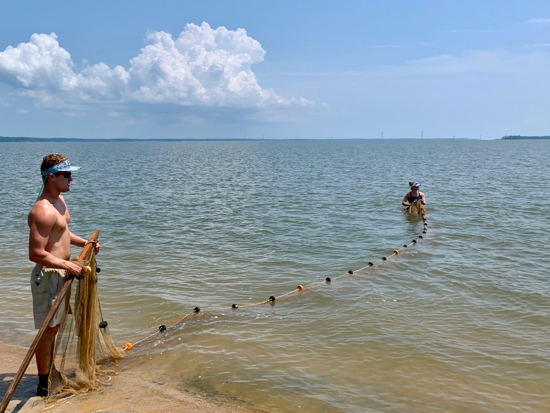 Striped bass play an important role as a top predator in the Chesapeake Bay ecosystem and are a valuable resource for commercial and recreational anglers. Professor Mary Fabrizio, who directs the Juvenile Striped Bass Seine Survey at VIMS, notes that the economic and ecological value of striped bass lends significant interest to the year-to-year status of their population. "By estimating the relative number of young-of-year striped bass," she says, "our survey provides an important measure of annual and long-term trends in the Bay's striped bass population."

The VIMS survey samples 18 index sites in the Rappahannock, York, and James River watersheds. Biologists sample each site 5 times from late June to late August, deploying a 100-foot seine net from the shore. Each fish captured in the net is counted, measured, and returned to the river. These young striped bass usually measure between 1.5 and 4 inches. Survey scientists in Virginia measured 1,512 juvenile striped bass at these stations in 2021. VIMS has been conducting the survey annually since 1967 for the Virginia Marine Resources Commission (VMRC). 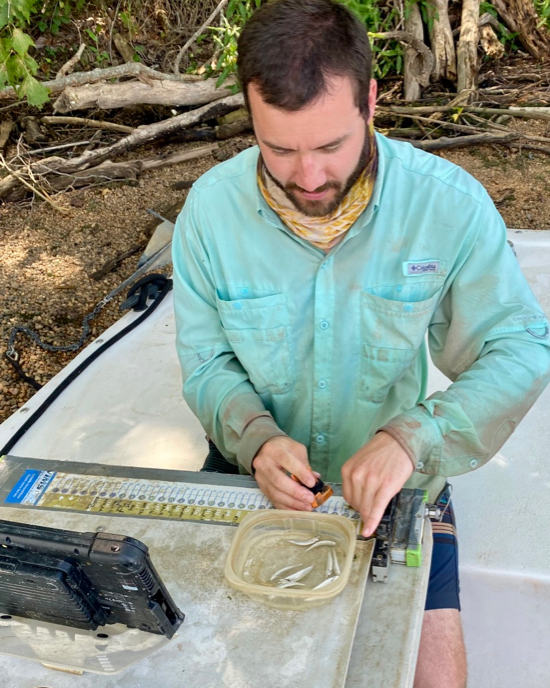 The striped bass population in Chesapeake Bay has rebounded from historic lows in the late 1970s and early 1980s after fishing bans were enacted in Delaware, Maryland, and Virginia in the mid- to late-1980s. Since then, the population increased to the point that striped bass in the Bay and elsewhere were considered recovered. In 2019, scientists determined that the coast-wide striped bass population was overfished and that mortality due to fishing was higher than what the population can withstand in the long term. Monitoring of juvenile striped bass recruitment will continue next year to provide managers with crucial information to sustainably manage this important species.