Excess nitrogen is a major threat to water quality in coastal waters worldwide. Found in treated wastewater, farm and lawn fertilizers, and combustion exhaust, it fuels blooms of algae that shade submerged grasses and suck oxygen from the water when they die and decay. 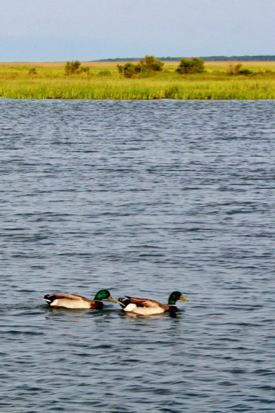 A new study by researchers at William & Mary’s Virginia Institute of Marine Science provides additional evidence that wastewater from a poultry processing plant has a particularly significant impact on water quality and nutrient cycling. That’s because it contains not only lots of nitrogen, but antibiotics and byproducts of the process the plants use to treat their wastewater. These byproducts are thought to inhibit the growth and activity of microbes that would otherwise help remove nitrogen from tidal creeks before it can enter coastal systems.

The researchers, VIMS PhD student Miguel Semedo and professor Bongkeun Song, say their study is the first to evaluate poultry-industry impacts on water quality and nutrient cycling using genetic, microbial, and remote-sensing techniques. Results of their work appear in the January issue of Environmental Science & Technology. The study was supported through the Fulbright Program and Semedo’s graduate fellowship from Virginia Sea Grant.

Microbes remove nitrogen from aquatic ecosystems through a process called denitrification. “Microbes perform a number of ecosystem functions,” says Semedo, now a post-doctoral researcher at the University of Porto’s Interdisciplinary Centre of Marine and Environmental Research (CIIMAR) in Matosinhos, Portugal. “Denitrification is one of the most vital, as it has the potential to remove excess nitrogen from the system.”

Denitrifying microbes have unique genes that control the denitrification process, a series of steps that transforms nitrate and nitrite—inorganic forms of nitrogen found in wastewater—into gaseous forms such as nitric oxide, nitrous oxide, and dinitrogen. The latter compounds are unusable by most organisms and thus contribute little or nothing to over-fertilization of coastal waters. 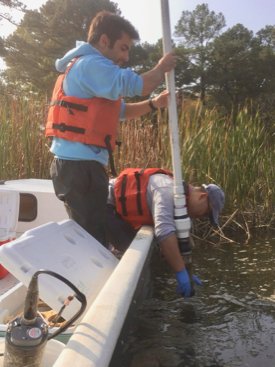 Semedo and Song conducted the study in two tidal creeks on Virginia’s Eastern Shore—one with a poultry processing plant in its headwaters and one without. The creeks drain into the coastal lagoons that lie between the mainland of the Delmarva Peninsula and its offshore barrier islands.

The pair measured nitrogen levels in the headwaters, middle, and mouth of each creek on four occasions between November 2016 and September 2017. They also collected sediment samples for laboratory analysis at VIMS, as denitrifying microbes generally live in muds on the creek bottom. In the lab, they identified the species of microbes present, noted which contained the genes known to control denitrification, and subjected microbes from the uncontaminated “control” creek to water from the creek impacted by poultry-plant effluent. 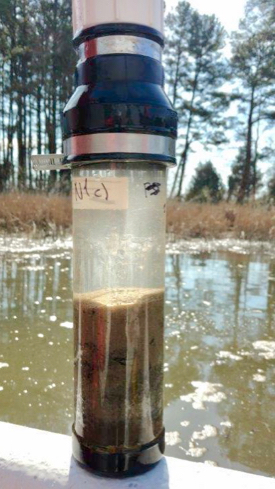 Their field results showed clear evidence that nitrogen levels were higher in the contaminated creek. “The levels of nitrate in the bottom waters of the impacted creek were significantly higher than those in the reference creek across all stations in most seasons,” says Song. “On average,” adds Semedo, “nitrate levels in the impacted creek were 34 times higher at the headwaters station, 47 times higher at midstream, and 23 times higher near the mouth.” While nitrate concentrations in the impacted creek did decline with increasing distance from the plant’s discharge site, the rate at which they did so (33% removal per kilometer) was much lower than in the reference creek (70% per km).

The pair’s lab results supported the field studies, and helped clarify the causes of the reduced denitrification. 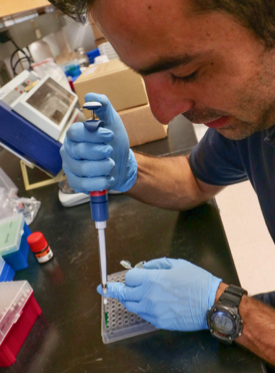 Semedo and Song’s genetic studies revealed that the lowest abundance of denitrifying genes occurred in samples from the impacted creek, closest to the discharge from the processing plant. This pattern occurred throughout the year. Total bacterial abundance followed the same trend.

Further support for their findings comes from differences in the abundance of chlorophyll-a in the waters of nearby coastal lagoons as estimated by satellite imagery. This photosynthetic pigment is an indicator of algal growth. 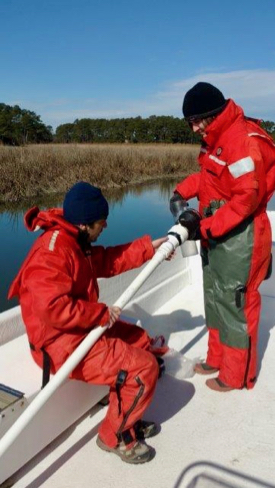 Though conducted on a single pair of creeks that feed seaside lagoons, Semedo and Song’s analysis has broader implications for water quality and effluent management in the Chesapeake Bay, the United States, and the world. A new graduate student in Song’s lab plans to conduct a follow-up study to examine how expansion of poultry grow-out houses might impact water quality in the Eastern Shore’s tidal creeks. In Accomack County, where the studied creeks are located, 254 broiler houses were in operation as of 2014, with 245 new houses authorized since then. Of these, 218 have been constructed as of February 2019; 11 of these were permitted in 2018.

A preliminary study conducted in 2018 by researchers at VIMS’ Eastern Shore Laboratory in Wachapreague did not find impacts from storm-water runoff in watersheds with recently constructed poultry grow-out operations. That study is ongoing. With new regulations requiring storm-water controls and litter management, the newer facilities are projected to have less impact than in the past.

The Delmarva peninsula—with 56 tidal creeks draining into seaside lagoons and the Chesapeake Bay—has the highest concentration of broiler chickens per farmland area in the U.S. The U.S. Environmental Protection Agency estimates that of the 1,186 poultry processors across the nation, 108 (9.1%) discharge treated wastewater directly into the surface waters of lakes, rivers, oceans.