For Virginians, Kepone© is mostly—and thankfully—old news. Industrial release of this insecticide during the 1970s contaminated 60 miles of the James River and led to a decade-long ban on eating its fish, but dilution and burial beneath the riverbed has now greatly reduced the risks from this persistent pollutant.

That at least appeared to be the story until a recent scientific discovery in the French West Indies, where farmers long used the generic Kepone© chemical chlordecone to combat banana weevils. A team of French researchers have found that chlordecone does not persist in the environment for as long as previously believed, but instead breaks down into a dizzying array of related molecules. These include 10-monohydrochlordecone; 2,4,5,6,7-pentachloro-1H indene; and tetrachloroindene-7-carboxylic acid.

The discovery of chlordecone’s unexpected mutability, plus a shared history of environmental contamination, has now kindled a research partnership between William & Mary’s Virginia Institute of Marine Science, the Université Paris Saclay, and other universities and agencies in France and the French West Indies. Scientists at VIMS have been monitoring the concentration of Kepone© in James River fish since the late 1970s. 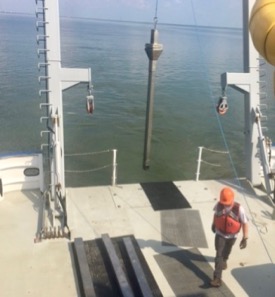 The immediate goal for the Virginia-based field research is to investigate whether Kepone’s newly discovered breakdown products also occur in James River sediments. If so, the researchers plan to seek funding to study how these chemicals might be impacting the health of the river, its wildlife, and the area’s human population. 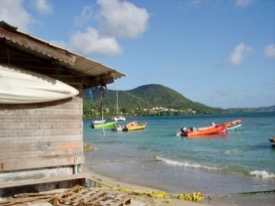 The researchers are now dating and chemically analyzing their sediment cores, a painstaking process that will take several months. They are not at all sure what they might find. “We don’t know if we’ll find higher or lower chlordecone concentrations, or any of the previously identified breakdown products,” says Della-Negra. “And might we find some others? There are so many environmental parameters we have to consider—including the rate of flow and the sedimentation rate.”

“As far as the James River goes, I doubt the breakdown products would accumulate in the food chain as much as the parent compound, because they tend to be more polar and hydrophilic,” says Unger. 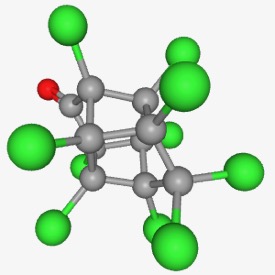 Polar molecules—those with a negative charge on one end and a positive charge on the other—tend to remain dissolved in water, whereas non-polar, hydrophobic compounds like chlordecone tend to move into animal tissues and up the food web.

But in the French West Indies, it’s a different story. Banana plantations—which constitute more than 25% of cultivated acreage in Martinique and 10% in Guadeloupe—used chlordecone for more than 30 years (1964-1993), leading to heavy and widespread contamination of soils, freshwater habitats, and the coastal zone.

“In Martinique,” says Unger, “they are exposed to really high concentrations relative to those in the James. Also, all our exposure was through the aqueous environment, getting into the river and then accumulating in fish, whereas in the islands, they have high concentrations in soils and plants, and the entire food chain has been contaminated. It’s a different and much more alarming scenario.”

Della-Negra concurs. “Chlordecone has even been found in Guadeloupe’s tap water,” she says, and “more than 90% of Guadeloupean and Martinican people are contaminated.”

In an irony with painful echoes of the islands’ colonial past, chlordecone accumulates most readily in the root crops traditionally grown by subsistence farmers on Guadeloupe and Martinique, and least readily in fruits—including bananas—which are mostly grown on foreign-owned plantations and largely exported overseas.

The socio-political aspects of chlordecone contamination in the French West Indies are the focus of Dr. Malcom Ferdinand, a social scientist at the French National Centre for Scientific Research.

Ferdinand, who recently spoke at VIMS about his work, says the islands’ contamination “finds an acute resonance with their history of colonialism and slavery.” Particularly troubling is that use of chlordecone continued in the French West Indies until 1993, long after it was banned elsewhere. The U.S. stopped producing the chemical in 1975, shortly after the Kepone disaster in the James River. The chemical was banned in mainland France in 1990, but an exception was made for its overseas territories. 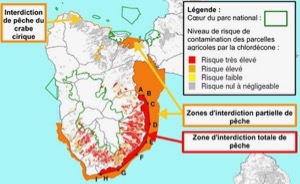 The delay between regulation of chlordecone in France and the French West Indies, a high incidence of prostate cancer among the islands’ male population, and prohibitions on farming and fishing in large areas has led to political unrest among island residents, which peaked during a 2018 visit by French President Emmanuel Macron.

The good news about the unrest is that it has led to renewed efforts by the French government to manage and remediate the contamination, including funding of research to better understand its movement through the islands’ soil and water—what Della-Negra calls “the contamination pathway.” It has also led to increased efforts to educate the island’s population on how they can minimize their exposure.

The troubling news is the consequent discovery of chlordecone’s many breakdown products, and the lack of understanding concerning their potential threats to the environment and human health. “Our research brought about a paradigm shift,” says Della-Negra. “It shows that chlordecone naturally degrades into soils, and that its transformation products represent a previously unsuspected pollutant.”

Unger says this issue isn’t unique to these chemicals, or to the French West Indies. “Our monitoring work in the James River is driven by regulations specific to Kepone,” says Unger. “When we started in this business a long time ago, we used more general methods to look for unknowns, and we’ve gotten away from that. Now, if something isn’t on a regulatory hit list, we won’t find it. When we look at an environmental sample, it can contain hundreds of thousands of unknown compounds.”

“We have all these breakdown products, but we don’t have any idea about their toxicity,” says Kuehl.

“Our goal now,” adds Della-Negra, “is to better understand the degradation mechanisms so we can find ways to improve them. We also have to learn more about the toxicity, stability, and biodegradability of the transformation products, and their concentrations in different habitats. Another big question is the potential consequences of human exposure.”