The Virginia Institute of Marine Science’s twelfth annual Marine Science Day on May 17th drew the largest and most enthusiastic crowd the Institute has seen since the event’s inception in 2002.

The open house—held on the VIMS campus in Gloucester Point—is a day full of fun and learning for all ages. Susan Maples-Luellen, VIMS’ Director of Outreach, estimates that nearly 3,000 people enjoyed a behind-the-scenes look at how VIMS research helps empower Virginians to protect and restore the coastal environment.

This year’s theme was bioluminescence, or the production and emission of light by a living organism. A common adaptation to life in the perpetual darkness of the deep sea, examples of bioluminescence could be found throughout the event—from the glow-in-the-dark T-shirts to the golf carts disguised as anglerfish with bioluminescent lures transporting visitors around the VIMS campus. 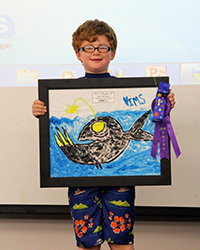 The Wacky Science Photo Booth allowed visitors to have their photo taken in front of a green screen, with the background remaining a mystery until the photos are posted to the VIMS website next week. Photos taken at the photo booth will be available by Tuesday, May 27.

The younger set had fun learning with bioluminescence-based activities in the Children's Pavilion, including a game of “Bioluminescent Twister” and crafts including stick puppets of deep-sea anglerfish the children could make to take home. They also had the opportunity to practice the ancient Japanese art of “Gyotaku” by creating prints or rubbings of fish and other marine life using rubber molds or block prints.

On VIMS’ lower campus, kids and parents got a chance to collect and observe organisms from the York River, and tour the Institute’s Teaching Marsh, Oyster Hatchery, Seagrass Greenhouse, and Riparian Forest.

VIMS’ Organic Transit ELF, a solar-powered bicycle that’s a new model for environmentally friendly urban transportation, made its Marine Science Day debut and proved to be quite popular. Visitors enjoyed sitting inside the ELF and learning how its use can help reduce the amount of nitrogen flowing into the Bay. 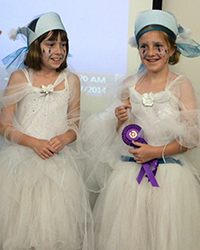 During the Marine Life Costume Contest, children and adults from around Tidewater paraded their handmade creature costumes in front of Waterman’s Hall before filling McHugh Auditorium to show their creations to the judges. An awards ceremony followed to recognize the best costumes as well as the winners of the Marine Science Day artwork contest, including 1st grader Johnny Vaughn whose glowing anglerfish creation served as the official design for the event.

Winners of this year’s awards for best costumes were:

VIMS Dean and Director John Wells thanks the sponsors of Marine Science Day, who along with faculty, staff, students, and volunteers make the annual event possible. 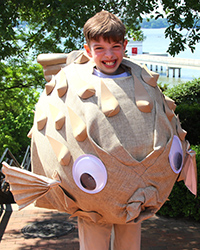 A full list of VIMS' ongoing and upcoming summer outreach events are available on the Public Programs section of the VIMS website.