The Virginia Institute of Marine Science welcomed a large and enthusiastic crowd to its 11th annual Marine Science Day open house in Gloucester Point on May 18th.

This year’s event, which was themed around oysters, offered visitors a behind-the-scenes look at how VIMS research helps empower Virginians to protect and restore the coastal environment and its marine life.

Guests spent the day learning about oysters and the pivotal role they play in the health of Chesapeake Bay and other coastal ecosystems. The younger visitors enjoyed educational oyster-based crafts and other activities such as mollusk tic-tac-toe and the Parade of Marine Life. 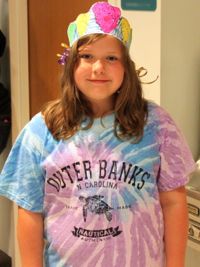 This year, for the first time, a social media contest offered attendees the opportunity to provide feedback and share their favorite moments and photographs. Visitors took to their Facebook and Twitter accounts throughout the day, posting photos and tagging tweets with the official hashtag of MSD 2013—#MarineScienceDay.

“I learned more about my local area today than I have in five years,” tweeted Janet Flora Corso. “You know it’s good if the kids say they had fun while learning!” A slew of other tweets and Facebook posts featured pictures of visitors seining in the York River and learning about oyster restoration in the VIMS oyster hatchery.

The Facebook user whose photo is deemed best by the VIMS Communications staff will be the lucky winner of a VIMS T-shirt, as will a randomly selected Twitter user who used the hashtag to share their MSD experiences. Announcement of the winners is expected by May 22nd. Photos from the “Wacky Science Photo Booth”—in which visitors were promised transport to a mysterious setting—will be available by Tuesday, May 28 at the latest.

Adults and children from around the Tidewater area didn’t let the threat of rain deter them from the annual Parade of Marine Life. The parade was moved indoors into in McHugh Auditorium, where participants showed off their handmade costumes portraying oysters, jellyfish, seahorses, an electric torpedo ray, a vampire squid, and many other marine creatures.

Winners of this year’s awards for best Parade costumes were:

During a volunteer appreciation reception following the festivities, VIMS Dean and Director John Wells sent a special thank you to this year’s sponsors of Marine Science Day, who along with the faculty, staff, students, and volunteers make this annual event possible. 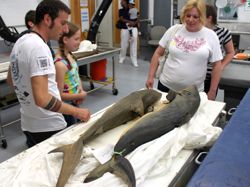 A full list of VIMS' ongoing and upcoming summer outreach events are available on the "Public Programs" section of the VIMS website.