The reintroduction of eelgrass into Virginia’s coastal bays—a collaborative effort among the Virginia Institute of Marine Science, the University of Virginia, The Nature Conservancy, and the Virginia Coastal Zone Management Program—is one of the great success stories in the annals of marine restoration.

This week, a special theme section of the leading journal Marine Ecology Progress Series features 9 articles that describe the 15-year restoration process and explain how the resulting “state change” from bare seafloor sediments to lush eelgrass meadows has led to a healthier and more vibrant ecosystem overall. A final article, however, cautions that the restored meadows are vulnerable to global warming. 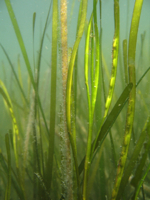 Eelgrass—one of several local species of submerged flowering plants—flourished in the seaside bays of Virginia’s Eastern Shore until the 1930s, when a wasting disease and the passage of a large hurricane wiped them out. When eelgrass disappeared, so too did the food and nursery habitat that they had provided to numerous marine organisms and seabirds. One notable loss was the bay scallop—which until that time had supported a significant commercial fishery.

Professor Robert “JJ” Orth—co-editor of the theme section and head of the seagrass restoration and monitoring program at VIMS—notes that two factors have combined to make Virginia’s coastal bays an ideal spot for restoring eelgrass and studying the resulting ecosystem changes.

First, the bays are part of the Virginia Coast Reserve. Managed by The Nature Conservancy, the reserve has been under intensive study since 1987 as a Long Term Ecological Research (LTER) site administered by the University of Virginia. That’s important, says Orth, because “Ongoing baseline studies by LTER scientists in the absence of eelgrass set the stage for understanding the subsequent ecological benefits of restoring eelgrass as a dominant species.”

Second, the reserve’s relatively pristine waters are a major reason for the success of the eelgrass restoration effort. “These bays are unique in that they receive little impact from human activities,” says Orth. “Data from the LTER show that they receive low levels of nutrient pollution from the surrounding watershed, and that water quality and clarity has remained high over the last two decades.” Clear water is key for transmitting the sunlight that seagrasses need to thrive.

VIMS professor Ken Moore and colleagues contribute to the theme section with a comparative study that expands on the link between water quality and eelgrass abundance. Their results show that the increased abundance of eelgrass in the pristine waters of the coastal bays is countered by decreased or static abundance in nearby areas of lower Chesapeake Bay where waters are less clear and warmer during the summer.

Moore says “Our data show that a combination of factors in the coastal bays—including cooler summertime water temperatures and lower light attenuation—interact to both increase the proportion of light available for eelgrass photosynthesis, and to decrease the amount of light the plants need to meet their metabolic requirements through photosynthesis.”

Other papers in the theme section report on studies led by Karen McGlathery and Matthew Reidenbach of the University of Virginia. These show that restoration of eelgrass to the coastal bays has led to recovery of key “ecosystem services,” including increased capture of solar energy and subsequent transfer up the food chain, greater removal of polluting nutrients, and more trapping of suspended sediments. The latter leads to clearer water, which in turn further stimulates eelgrass growth.

Overall, these studies reveal that the increase in ecosystem services shows no sign of leveling off— even after nine years of eelgrass recovery—thereby suggesting that full restoration has not yet been reached. This optimistic finding is tempered by a modeling study led by UVA’s Joel Carr, which indicates that the eelgrass meadows “have limited resilience to increases in water temperature predicted from current climate change models.” That conclusion is bolstered by Moore’s field-based study, which shows that eelgrasses are already stressed in Chesapeake Bay by recent summertime heat waves.

Orth and his team began planting eelgrass seeds and shoots into Virginia’s coastal bays in 1997, a year after hearing an anecdotal report of a small eelgrass patch in South Bay. From 1999 through 2010, VIMS and UVA staff and Nature Conservancy volunteers have collected and broadcast 37.8 million eelgrass seeds across 309 acres in 4 coastal bays. Those plantings have now expanded through natural re-seeding into 4,200 acres of lush eelgrass meadow.

The 15-year effort has been funded by the grants from numerous agencies, notably the Coastal Programs of the Virginia Department of Environmental Quality (administered by NOAA’s Office of Ocean and Coastal Resource Management), the Virginia Recreational Fishing License Fund, the American Recovery and Reinvestment Act, The Nature Conservancy, the U.S. Army Corps of Engineers, the Virginia Department of Transportation, and private grants from the Allied-Signal Foundation, Norfolk-Southern, and the Keith Campbell Foundation for the Environment.