The program—funded by an anonymous donation to the VIMS Foundation—was established by VIMS’ Aquaculture Genetics & Breeding Technology Center (ABC) to help meet the demand for trained staff in industry, and to aid in the Institute’s own oyster-domestication programs.

This year’s trainees are Marisa Franks of Williamsburg; Cyrene Grover of Lisbon Falls, Maine; Janet Hanson of Largo, Florida; and Jim LaChance of Beverly, Massachusetts. “The 2013 interns are unique in that they all have previous experience with oysters,” says VIMS Hatchery Specialist Amanda Chesler. “Some have worked on oyster farms, while others have collected wild oysters and worked on oyster-restoration projects.”

The program was created in 2009 by VIMS professor and ABC Director Stan Allen who says, “The OAT program has become a deeply and mutually rewarding experience for both the participants and ABC employees. Most former OAT trainees have found jobs working in Virginia establishments, while others have been placed in oyster aquaculture positions in locations such as Washington state and Massachusetts.”

The interns will work throughout the oyster hatchery season—which runs from April to September—learning about all the stages of oyster aquaculture by rotating through hatchery, nursery, and farm grow-out activities.

A native of Williamsburg, Franks heard about the OAT program while volunteering for an oyster restoration project with the Chesapeake Bay Foundation. Armed with a degree in Biology from Virginia Tech, Franks applied to the program because of her passion for Chesapeake Bay and her love of seafood. “I’m a big supporter of oyster aquaculture being a sustainable way to produce oysters to be enjoyed as food,” says Franks. 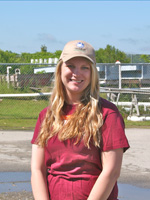 “Growing up on the Bay and its tributaries molded me into a Bay enthusiast, and having the opportunity to be a part of a program where I can learn more about ways I can help the Bay has always been a dream of mine,” she says. “I’ve always respected VIMS as an institution and I’m really excited to have the opportunity to gain experience and build relationships with the ABC staff and my fellow interns.”

Grover hails from Lisbon Falls, Maine, where she developed a life-long love of the ocean. A graduate of the University of Colorado with degrees in geography and environmental studies, Grover says she was first introduced to oyster aquaculture during one of VIMS’ annual Marine Science Day events a couple of years ago. 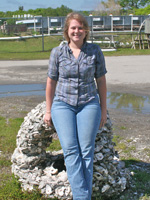 “I was very intrigued by oyster aquaculture and I instantly knew that’s the career path I wanted to pursue,” says Grover. “I believe the OAT program offers an in-depth and comprehensive foundation for me to build on in order for me to reach my ultimate goal of owning my own oyster farm.” 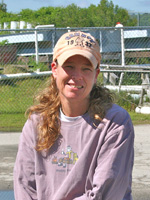 “By the end of the program, I hope to gain knowledge, experience, and the confidence to complete all tasks required for oyster aquaculture,” says Hanson.

Coming to VIMS from Beverly, Massachusetts, LaChance gained experience in oyster aquaculture in New England while pursuing a Master’s degree from Brown University. LaChance says he hopes to understand more about the genetics and breeding of oysters, what makes a good oyster, and how to farm them. 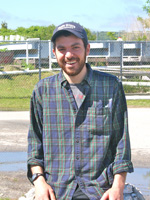 “I developed an interest in aquaculture from my time spent on the water fishing and diving while growing up on the north shore of Boston,” says LaChance. “That interest has led me to want to be able to help the aquaculture industry to continue its healthy growth.”

Covering all the bases

All four of the interns will be trained on all aspects of oyster aquaculture. The trainees are currently working on a variety of hands-on tasks in the hatchery, ranging from spawning adult oysters, to caring for oyster larvae and algal cultures, and even to maintaining pumps and filters. Once oyster spat develop fully, the trainees move on to the VIMS nursery and field sites where they will focus on the latter phases of the oyster lifecycle.

In the nursery, they will learn the importance of density and water flow in VIMS’ upwelling systems. Once in the field, trainees will learn the importance of seawater flow rates, sieve and bag sizes, and oyster seed sizes and densities. They will also learn field grow-out methods, such as “rack and bag.” Trips to commercial facilities will acquaint the trainees with alternative grow-out methods.

“When the program comes to an end in September, we hope to have all of our interns employed in the aquaculture field, whether that be working in a commercial hatchery or farm, or starting their own business,” says Chesler. “We hope each OAT leaves feeling confident in their skills as an oyster aquaculture professional.”

Funding for the Oyster Aquaculture Training program was made as a donation to the Virginia Institute of Marine Science Foundation, a nonprofit 501 (c) (3) organization that supports the education and research missions of VIMS.