His talk was the latest in VIMS’ monthly series of After Hours lectures, which continues April 28th with a presentation by VIMS professor Rom Lipcius on the recent upsurge in blue crab numbers in Chesapeake Bay.

Wielicki, lead scientist for several NASA climate missions and a member of the U.N.’s Intergovernmental Panel on Climate Change (IPCC), emphasized the difference between weather and climate during his talk to the 50-plus local citizens gathered in VIMS’ McHugh Auditorium.

His goal, he said, was to help audience members “understand if a cold winter or a warm summer is or is not related to something like global warming or climate change.” His talk was set against the blizzards and frigid temperatures that affected the eastern U.S. and Europe this past winter, and last summer’s searing heat—think Moscow and Hampton Roads—which tied 2010 with 2005 as the warmest year on record for global surface temperatures. 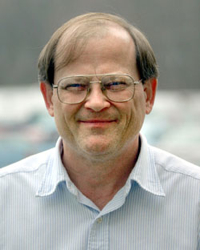 “Climate is the long-term average of weather,” began Wielicki. “Weather is what happened at 10 this morning in Gloucester Point. It’s wind, rain, and temperature. But climate is much more than that. It’s ocean circulation and salinity, sea level, the chemistry of greenhouse gases like carbon dioxide and methane. It’s ice sheets, snow, and sea ice. Climate is what happens across large areas and over longer time scales of months to years.”

Wielicki stressed that the difference between weather and climate extends to their predictability. “There is a weather-prediction limit,” he said. “Even in a perfect world with perfect data and the fastest computers, we will never be able to predict weather more than 14 days in advance. Never. But if you try to predict the average of a month or a season or a year, it actually becomes very predictable. There is no known limit on predicting the long-term climate.”

The reason, he says, is that weather is driven by dynamics—by wind, air pressure, and convective precipitation. Climate, on the other hand, “is driven by the energy balance of the planet—how much sunlight is coming in and how much heat the Earth is shedding to space.”

He elaborated on this point using the example of a pot of water atop a stove, noting that it would be impossible to predict exactly when and where the first bubble forms as the water begins to boil, but quite easy to predict how long the pot would take on average to reach a full boil.

The upshot of all this, says Wielicki, is that a single warm summer in a single place—say Tidewater Virginia during July 2010—doesn’t mean that global warming is undeniably here. There is simply too much natural variability in weather to ascribe a single extreme season to current warming. In the same way, a cold snap, a cold winter, or even a string of cold winters doesn’t negate the reality of global warming.

But predictions of global warming in the coming century are something you can bank on, says Wielicki, because they’re based on a simple energy budget in which increasing levels of carbon dioxide and other greenhouse gases retain more and more of the heat energy that’s supplied to Earth by the sun. He adds that global warming began to lift Earth’s temperatures above the realm of natural variability beginning around the year 2000, an observable fact that led the IPCC to increase the confidence of its stated conclusions that global warming is indeed real.

Last summer’s heat wave in Moscow stoked fires throughout the country; coincided with 700 deaths per day, twice the daily summer average; and ruined at least 900 million acres of cropland. This kind of heat—with temperatures 10 degrees warmer than average for much of June and all of July and an all-time high of 44.0 °C (111.2 °F) on July 11—is what climate models predict as average for 2100—and what Wielicki says will be “the new normal for Moscow.”