Researchers at the Virginia Institute of Marine Science are holding an extremely rare type of crab that was pulled from the Chesapeake Bay last month by watermen David Johnson and Robert Watson of Deltaville.

The crab, called a "bilateral gynandromorph," is split right down the middle—its right half female and its left half male. 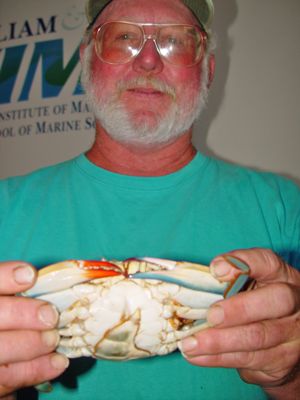 Neither the watermen nor VIMS crab expert Rom Lipcius have ever seen a crab like this one, and all have spent more than 25 years on the water.

Generations of school kids and crabbers have learned to use a set of body traits to tell male and female blue crabs apart. In a male, or "Jimmy," the underside "apron" is pointed like the Washington Monument and the claws are deep blue. In a female, or "sook," the apron is rounded like the nation's Capitol Dome, and the claw tips are painted red.

Johnson's crab confounds these rules for assigning gender. It has one "male" claw that is entirely blue, and one "female" claw that is tipped with red. Its apron is rounded on the right and sharply pointed on the left. Its reproductive organs are similarly divided.

It was the blue claw that caught Johnson's eye when he pulled his crab pot from the waters off Gwynn's Island on May 21st. Male crabs are uncommon in the mainstem of the Bay at this time of year.

"I was surprised when I saw that its other claw was red like the rest of the sooks in the pot," says Johnson. "I was even more surprised when I turned it over and saw its apron." That's when Johnson decided to contact Lipcius for help.

Lipcius combed the literature and found a report of a gynandromorph crab that was caught near Smith's Island in 1979. He then called geneticist Al Place of the University of Maryland's Center of Marine Biotechnology. Place is an expert on the molecular basis of gender determination.

Juvenile organisms grow through a series of divisions in which the number of cells progressively doubles, from 1 to 2, 2 to 4, 4 to 8, and so on. These early "stem" cells later differentiate into all the different body tissues and organs.

In mammals, a single gene (SRY) controls whether an individual is male (XY) or female (XX). Gynandromorphy in mammals occurs due to an error in early cell division, when an X or Y chromosome is left behind in the nucleus of a dividing cell.

For instance, failure to pass along a Y chromosome during cell division in a male mammal (XY) can produce a female "daughter" cell with a single X chromosome (XO). If this error happens early enough in development, the male-female split can propagate through all the remaining development stages of the organism.

Gender determination in other animals is more complicated—and more fluid. In birds and reptiles, hormone levels inside the mother can control gender. In fishes, it can depend on environmental conditions like water temperature. Some fishes can even change gender during their life cycle.

Gender determination in crustaceans like the blue crabs is poorly understood. "There are multiple potential causes," says Place. "We don’t know how many genes are involved or what the environmental factors might be."

One thing Place does know is that a crab with male and female halves must have been that way almost from conception. "Bilateral symmetry arises very early in development," says Place. VIMS geneticist Dr. Kimberly Reece adds that the condition "typically arises when the organism has between 8 and 64 cells."

Researchers plan to study the crab by following it through at least one spawning cycle. That would help them tell if the organism is a functional female capable of laying eggs, whether it can fertilize itself, and whether its offspring would be inbred. They would also like to study its DNA to find out the exact genetic make-up of the cells within its male and female halves.

Knowledge gleaned from these studies might someday help researchers trying to breed blue crabs in captivity.

The crab is currently on display in an aquarium in the Watermen's Hall Visitors' Center at VIMS' main campus in Gloucester Point.