A team of researchers led by professor Deborah Steinberg of the Virginia Institute of Marine Science has returned to Antarctica for their annual 6-week field season aboard the research vessel Laurence M. Gould.

The VIMS team will collect zooplankton at a series of sampling stations in the waters along the west coast of the Antarctic Peninsula to better understand how climate change is affecting the microscopic animals that form the base of the Antarctic food web. The expedition is part of the Long-Term Ecological Research Program at the U.S. Palmer Research Station on Anvers Island. The PAL-LTER program is headed by former VIMS professor Hugh Ducklow, and funded through competitive grants from the National Science Foundation.

"We're interested in zooplankton for two main reasons," says Steinberg. "First, changes in their abundance and species composition ripple up the food chain to affect fish, penguins, and whales. Second, they play an important role in the  ‘biological pump,' potentially helping to move carbon dioxide from the atmosphere into the deep sea where it doesn't contribute to global warming." 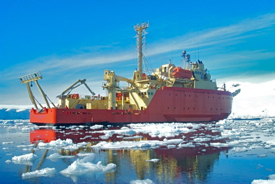 Annual winter temperatures along the Antarctic Peninsula have increased by 11°F during the last 50 years, five times the global average warming. Researchers with the Palmer LTER program have monitored this change since 1991, and are now focusing their studies on how the rapidly warming climate is affecting sea ice and marine creatures in the region. In the 36 years since researchers first started counting Adélie pen­guins in the area, the number of breeding pairs has declined from around 35,000 to 5,600, a drop of more than 80 per cent.

Price is studying the number and kinds of "microzooplankton" in Antarctic waters, and the impact of their grazing on local phytoplankton populations. Ruck is investigating how changes in energy stores among Antarctic zooplankton may affect penguin nutrition. This is the third Antarctic field season for both. Funkey, a Master's student in the Physcial Sciences Department at VIMS, is serving as a field assistant.

Bernard, who has been at Palmer Station since early October, is studying how changes in krill populations might be affecting penguins and other krill predators farther up the food chain. Krill are the keystone of the Antarctic coastal ecosystem.

Cope, also in his third Antarctic field season, is an expert in identifying Antarctic zooplankton species, and helps to operate the team's lab equipment and high-tech sampling nets. These MOCNESS devices (for Multiple Opening and Closing Net and Environmental Sensing System) have a series of separate nets that can be remotely opened and closed to allow for collection of zooplankton from specific depths.

Smoot graduated from William and Mary in May 2010 where she majored in Biology and Environmental Science. While there she worked in Emmett Duffy's lab at VIMS for two years helping with studies of the effects of environmental stress on  eelgrasses, which provide an important habitat for crabs and fish in Chesapeake Bay.  She also studied abroad in Australia where she completed a Tropical Marine Ecology program. For the last six months she has been working as a Fisheries Intern for Oceana, a non-profit organization focused on marine conservation. This is her first visit to Antarctica. 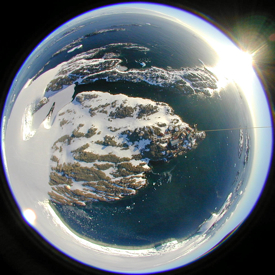 The Palmer LTER is one of more 26 LTER research sites located throughout the United States and its territories; each focused on a specific ecosystem. The Palmer LTER studies a polar marine biome with research focused on the Antarctic pelagic marine ecosystem, including sea ice habitats, regional oceanography and terrestrial nesting sites of seabird predators.