Just in time for Halloween, a new study reveals that pumpkin-colored zombies may be running rampant through your local salt marsh.

The research, led by Dr. David Johnson of William & Mary’s Virginia Institute of Marine Science, isn’t quite as spooky as it sounds. These zombies aren’t flesh-eating humanoids of the Walking Dead variety, but tiny shrimp infected by a microscopic parasite. Even so, their growing abundance in nutrient-fueled salt marshes may well portend future threats to humankind. 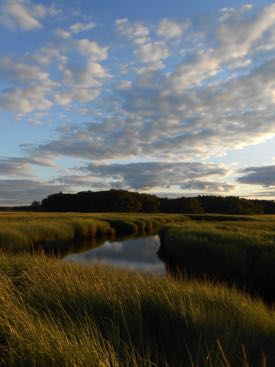 The study, co-authored by Dr. Richard Heard of the University of Southern Mississippi’s Gulf Coast Research Laboratory, appears in this week’s issue of Ecosphere. It builds on a long-term experiment in which researchers have been adding nitrogen to a New England salt marsh each year since 2004. Their goal? To investigate how these key coastal ecosystems respond to nutrient-rich runoff from fertilized fields, wastewater treatment plants, and other human sources.

For the current study, Johnson and Heard focused on how nutrient pollution might affect parasites. “Parasites are part of every ecosystem,” says Johnson, “but we understand relatively little about how they respond to global changes. We wanted to test how parasites in a marsh respond to nutrient enrichment—specifically whether they would increase in abundance and biomass as predicted for free-living organisms.”

For their experimental animals, they chose a flatworm-like parasite called Levinseniella and one of its hosts, the amphipod Orchestia . Johnson describes amphipods as “small, hopping shrimp” that subsist by eating dead and decaying algae and other marsh detritus. “If you’ve been to the beach and picked up a piece of seaweed,” he says, “you’ve probably seen their cousins, the beach hoppers, flipping around like acrobats.”

The pair chose to study this particular parasite-host pair for two good reasons. First, O. is abundant. Second, when parasitized by L. , it just happens to change both its color and behavior.

“Normal amphipods are brown,” says Johnson, “and when you pull up dead grasses, they scatter like roaches in a kitchen when you flip on the light. But when infected with L. , they turn bright orange and don’t run away. Orange amphipods wander out into the open, unaware of being picked off by a bird.” 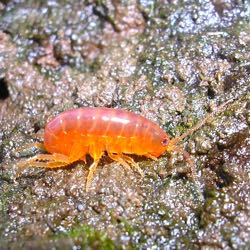 Johnson says this is all part of the parasite’s plan: “To reproduce, it needs to get into the gut of a bird. To get into the gut of the bird, it turns the amphipod into a suicidal neon sign that screams ‘Eat me!’” The amphipods’ bright orange hue also made it easy for the researchers to distinguish infected and uninfected individuals during field sampling.

Johnson and Heard’s hypothesis was that nutrient enrichment would increase not only the number of amphipods—an example of what ecologists call “bottom-up forcing”—but the number of their parasites as well.

Johnson says this question is important because the answer throws light on whether what happens at the bottom of the food web ripples upward; in this case, whether more nutrients can lead to more parasites. 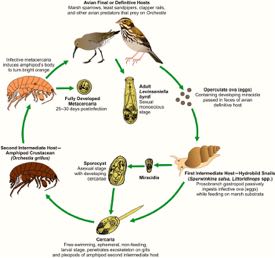 When Johnson and Heard took to the salt marsh to test their ideas—carefully counting the number of infected and parasite-free amphipods in fertilized and unfertilized plots each summer between 2009 and 2014—they discovered that nutrient enrichment did indeed increase the number of both amphipods and parasites, and strikingly so.

“The prevalence of the parasite increased to 13 times higher in nutrient-enriched marshes,” says Heard, “while the biomass density of infected amphipods was on average 11 times higher.”

The researchers say their results—if typical of other ecosystems—could have implications for human health.

“Our work may provide insights human activities and disease emergence,” says Heard. “Although the parasite we studied doesn’t infect humans, many other human parasites, such as those that cause malaria, schistosomiasis, and the West Nile virus, do have aquatic hosts or vectors. If these parasites respond like our parasites, nutrient pollution would enhance their populations as well, thereby promoting disease.”

“Calls to reduce nutrient inputs into aquatic ecosystems have typically been motivated by a desire to protect habitat,” says Johnson. “We believe nutrient reductions may also protect animal and human health by reducing parasites in the ecosystem.”