One grant is a $356,000 award to William & Mary’s Virginia Institute of Marine Science and its Center for Coastal Resources Management (CCRM). The other provides $750,000 to Virginia’s Department of Environmental Quality (DEQ). Both grants will support three years of effort to advance and refine the Commonwealth’s latest State Wetlands Program Plan—a blueprint for not only preventing any net loss of wetlands, as specified by the U.S. Clean Water Act, but for increasing Virginia’s wetland acreage and ecological function.

“Wetlands play a significant role in protecting our nation’s water supply,” said EPA Regional Administrator Shawn M. Garvin during a press conference on the VIMS campus in Gloucester Point. “By taking action to protect and restore these valuable resources, DEQ and VIMS are protecting sources of our drinking water, preventing flooding, and making us more resilient to climate change.”

Also speaking at the press conference was Dr. Mark Luckenbach, VIMS’ associate dean of research and advisory services, who thanked EPA for “generous support that will allow us to continue guiding the informed management of Virginia’s threatened wetland resources.”

Dr. Carl Hershner, VIMS professor and CCRM director, says “the funding will help us determine which wetlands are most vulnerable to climate change, and how we can maximize their continued capacity to provide important ecosystem services.” Wetlands serve as nursery and feeding grounds for waterfowl, finfish, and shellfish; protect against flooding and erosion; absorb silt and pollutants; and provide for recreational opportunities. 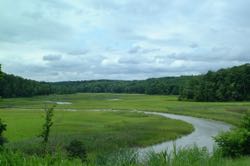 Dr. Donna Bilkovic, project lead and a research associate professor with CCRM, says the new grant will expand on previous EPA awards that helped VIMS focus on headwater wetlands. “We’ll be developing a framework for assessing the vulnerability of wetlands along a continuum from headwaters to tidal salt marshes,” she says. “We’ll use both field data and modeling to pinpoint the coastal wetlands that are most vulnerable to climate change, and to identify management options for their preservation or managed retreat in light of rising seas.”

The VIMS team will also inform decision-making by mapping historic changes in the geography and plant life of Virginia’s wetlands. They’ll do so by comparing wetland conditions as recorded in a tidal-marsh inventory conducted by CCRM in the early 1970s with similar measures recorded recently and planned for the next few years. They’ll focus this effort in two distinct wetland settings: along the York River on Chesapeake Bay’s western shore, and at coastal sites along Virginia’s Eastern Shore.

The basic idea, say Bilkovic and Hershner, is to give local planners the data they need to make informed decisions regarding development and preservation. “A commercial or residential development that would have minimal impact on a healthy wetland could significantly affect a wetland that’s already stressed by warmer temperatures, more intense rainstorms, rising sea level, and invasive species,” says Hershner.

Adds Bilkovic, “A wetland that ‘s subjected to high wave energy and is surrounded by lots of paved surfaces will be more sensitive to both climate change and human stressors. But if it’s in a low-lying area with a steady supply of sediment, we might give it a chance to survive by providing the space to migrate landward.”

The grant to Virginia’s Department of Environmental Quality will fund development of strategies to help planners better identify and protect wetlands of high ecological value. High-value wetlands include the forested headwater swamps that capture pollutants and sediments before they can enter the tributaries that feed Chesapeake Bay.

DEQ Director David K. Paylor says, “Our wetland resources play a critical role in environmental health, and Virginia appreciates the opportunity to make the best possible use of this grant. Providing much-needed attention to aquatic resources is a key priority in our efforts to help restore and protect the quality of our wetlands and improve climate resiliency.” 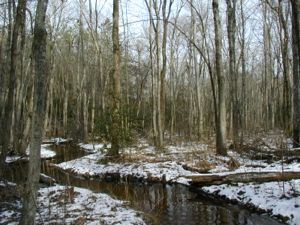 One focus of DEQ’s effort will be to expand and upgrade the Wetland Condition Assessment Tool, or WetCAT. Developed in collaboration with VIMS, WetCAT is an online mapping tool that helps people throughout Virginia minimize wetland impacts when making planning decisions.

David Davis, director of DEQ’s Office of Wetlands and Stream Protection, says his staff will use the EPA funds to help “extend WetCAT to include online regulatory data from the US Army Corps of Engineers, a modification specifically requested by various user groups.”

Havens agrees the EPA funding will help make WetCAT even more effective. “It will give users the ability to assess the condition of even the smallest wetland, and determine how it might be impacted by changes in land cover within its watershed,” he says.

“The overall goal,” adds Havens, “is to provide easy access to comprehensive local information to meet the needs of planners, regulators, and property owners.”