A new study by researchers at the Virginia Institute of Marine Science shows that turbulence from boat propellers can and does kill large numbers of copepods—tiny crustaceans that are an important part of marine food webs.

The researchers don’t expect their findings to lead to any new “No Wake” signs in local waterways; their interest instead is to better understand how significant levels of propeller-induced mortality among copepods might affect local food webs in Chesapeake Bay and other highly trafficked waterways.

“Non-predatory mortality such as this is rarely considered in the literature,” says Bickel, “but it could be important for properly understanding zooplankton ecology and food-web dynamics in coastal and estuarine waters, particularly during summer months when recreational boating increases.”

Zooplankton are small drifting animals that consume algae and other microscopic floating plants. Copepods—shrimp-like crustaceans about the size of a rice grain—typically make up a major part of the zooplankton community and serve an important role by moving energy up the marine food chain—from microscopic plants that are too small for most fish to eat up to larger game-fish and, ultimately, humans. 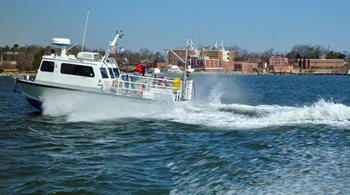 “If turbulence from boat propellers is killing off large numbers of copepods,” says Bickel, “it could be reducing the supply of food energy available to fish, and reducing zooplankton grazing of algal blooms.” “It’s like cutting down the number of zebras in a herd,” she adds. “That would affect not only the zebras, but also the grass they eat and the lions that eat them.”

This type of shift could potentially have a noticeable impact on marine food webs and water quality. “If a large portion of copepods are being killed, and if they sink down to the bottom, you could have additional high-quality organic material available for bottom-dwelling organisms to eat,” says Bickel. “If the amount is high enough, microbial decomposition could even perhaps contribute to development of localized low-oxygen ‘dead zones.’”

The researchers caution that there are untold millions of zooplankton in the world’s aquatic systems, so that when viewed at a global scale, the portion of copepods killed by boat-generated turbulence is probably minimal. “The importance of turbulence as a source of mortality among copepods would be of much greater importance at a local scale,” says Bickel, “including highly trafficked areas near harbors and marinas, and within closed freshwater systems such as lakes.”

The research team studied propeller-induced mortality both in the field and laboratory. During the spring of 2010, they sampled copepods at three sites near the mouth of the Hampton River, a tributary of Chesapeake Bay. One site was a marina with numerous boats but minimal turbulence due to an imposed speed limit. The second was in a high-traffic area of a nearby navigational channel, where fast-moving boats generated considerable turbulence in their wakes. The third site was a tranquil shoreline opposite from the marina, with few boats and little or no boat-generated turbulence.

They compared the percentage of live and dead copepods collected from these sites using a dye that is only taken up by living copepods. The results of their comparison showed a much higher fraction of dead copepods in the channel (34%) than in the marina (5.9% dead) or along the shoreline (5.3%). 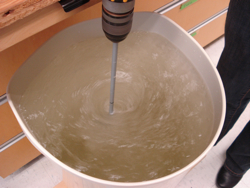 A field experiment in the York River near the VIMS campus confirmed the results of the Hampton River study. Here, they sampled copepods from within the wakes of passing boats, and again found a link between turbulence and mortality: the percentage of copepod carcasses increased from 7.7% outside the wakes to 14.3% inside the wakes.

The researchers were careful in both cases to minimize turbulence from their own vessel, using a rowboat for the Hampton River study and maintaining an idle during sampling in the York.

The team’s final experiment took place in the laboratory, where they exposed copepods to turbulence from a small motor calibrated to mimic the effects of different boat propellers. Their results again confirmed their earlier findings, with a clear link between mortality and increasing levels of turbulent energy.

Their experiments also show that natural turbulence from tides, currents, and waves is unlikely to stress or kill copepods other than perhaps during an extreme storm event such as a hurricane or nor’easter.