A 1995 graduate of the Ph.D. program in William & Mary’s School of Marine Science at VIMS, Daniel has served as an ASMFC Commissioner since 2007. Established in 1942, the Commission is a deliberative body of the Atlantic coastal states, coordinating the conservation and management of 25 near-shore fish species from Florida to Maine. Daniel replaces Paul J. Diodati of Massachusetts. 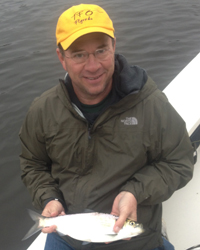 Daniel says it’s an honor to be elected as chair of ASMFC, and he’s looking forward to working with colleagues in 15 states along the Atlantic coast. “I think the ASMFC model is the best way to manage fisheries, and I’m excited to be able to have the opportunity to make a difference in its future,” he says.

VIMS Dean and Director John Wells says, “Louis has been an invaluable asset to the Commission and is well respected among his peers. We take pride in his many accomplishments, and his demonstration of the impact VIMS alumni can make on their field.”

During his term, Daniel plans to address coast-wide allocation issues involving spot, croaker, weakfish, and other species; usher in a new strategic plan for the Commission; and give back to his southern roots by focusing some of his attention on the South Atlantic Board, a coalition of state and federal partners involved with fisheries management in coastal waters of the southeastern U.S.

Similar to his duties at ASMFC, Daniel’s main priority in his position as Director of the North Carolina Division of Marine Fisheries is to manage the pursuit of its mission of protecting and enhancing the state’s marine resources.

A native North Carolinian who’s main focus has been on the fisheries in his home state, Daniel and his team at the NCDMF often work with fisheries departments in Virginia and other states along the East Coast. Currently, Daniel coordinates the development of long-term management strategies for North Carolina’s most economically significant fisheries.

Daniel has chaired numerous species management boards—most notably the ASMFC’s Atlantic Menhaden Board—where he guided Commissioners through the development, approval, and implementation of a new management regime that recognizes the ecological role of menhaden as an important prey/forage species. He also served as Chair and Vice Chair of the South Atlantic Fishery Management Council.

In addition to his leadership roles, Daniel has been recognized for his efforts by several different agencies. He’s a winner of the North Carolina Department of Environment and Natural Resources Distinguished Service Award and the U.S. Fish and Wildlife Outstanding Service Award.

Daniel has worked for the North Carolina Division of Marine Fisheries in various capacities since 1995. Prior to joining the Division, he worked with the U.S. Fish and Wildlife Service. Daniel received a B.A. in Biology from Wake Forest University, and a M.S. in Marine Science from the College of Charleston before pursuing his doctoral degree at VIMS.