The seagrass program at the Virginia Institute of Marine Science (VIMS) is collaborating with The Nature Conservancy (TNC) for the fifth consecutive spring to use volunteers, especially recreational divers and snorkelers,  in the largest and most successful seagrass restoration project in the world.

VIMS scientists have been restoring eelgrass to the seaside bays of Virginia's Eastern Shore since 1997. Their efforts to collect eelgrass seeds have resulted in more than 37.8 million seeds being broadcast into 309 acres within these bays during the last decade. As of 2011, these restored sites have spread naturally to more than 4,200 acres of lush eelgrass meadow.

The seed-collection project is a collaborative effort between VIMS' Submerged Aquatic Vegetation (SAV) program, led by VIMS Professor JJ Orth, and The Nature Conservancy. Other partners include the University of Virginia, the Virginia Marine Resources Commission, and the Virginia Coastal Zone Management Program.

VIMS broader 15-year effort to restore eelgrass to the seaside bays has been funded by grants from numerous agencies, notably the Coastal Programs of the Virginia Department of Environmental Quality (administered by NOAA’s Office of Ocean and Coastal Resource Management), the Virginia Recreational Fishing License Fund, the American Recovery and Reinvestment Act, The Nature Conservancy, the U.S. Army Corps of Engineers, the Virginia Department of Transportation, and private grants from the Allied-Signal Foundation, Norfolk-Southern, and the Keith Campbell Foundation for the Environment.

In turn, the seagrass restoration effort is part of an even broader program that also aims to restore bay scallops and oysters. Work on the bay scallop, which depends on eelgrass for its primary habitat, is being led by Dr. Mark Luckenbach of VIMS' Eastern Shore Laboratory. The oyster restoration work is being led by Barry Truitt of TNC and Jim Wesson of the Virginia Marine Resources Commission (VMRC).

The 2012 seed-collection effort begins on May 14 and will continue through June 1 depending on how long seeds remain on the plants. The goal is to harvest up to 10 million seeds. Volunteers will collect the seeds from eelgrass plants in water about waist deep. Collection will take place in South Bay, a shallow-water bay behind Wreck Island located 10 miles from Oyster, Virginia. 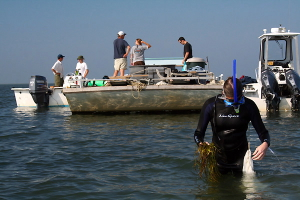 The seeds will be transported and stored in either The Nature Conservancy's seagrass storage facility on Oyster harbor or in VIMS' seagrass facility at Gloucester Point. Seeds will be held in large tanks with flowing seawater until their planting in coastal bays in the fall.

Orth notes that the success of past plantings in Virginia's southern coastal bays provides a rare bright spot in regional efforts to restore eelgrass. "This area is unique," says Orth, "in that it is the only place in this region, and perhaps in the world, where eelgrass restoration is successful at such a large scale." Attempts to restore eelgrass in Chesapeake Bay have been marginally successful due to poor water quality in many areas.

Orth says the success of eelgrass in Virginia's coastal bays reflects their cooler and clearer waters. Water quality in these bays is now being monitored by Dr. Ken Moore of VIMS. These coastal bays were covered with vast eelgrass beds until 1933, when a wasting disease and a powerful hurricane all but wiped them out along with the bay scallop, which was being commercially harvested. A lack of natural seeding then kept the bays largely eelgrass-free into the 1990s. Bay scallops had also failed to recover.

"We got a report of a little patch of eelgrass in South Bay in 1996," says Orth. "That's when the light went on that conditions there might be ripe for recovery, as long as there was a source of seeds." Orth and colleagues began experimental restoration efforts the following year with both seeds and transplanted shoots, and have spent the last 16 years perfecting the techniques needed to successfully harvest, keep, and plant eelgrass seeds.

Maps of the seagrass beds in these coastal bays can be viewed on the VIMS SAV interactive map, while information on real-time water quality data such as water temperature, oxygen, turbidity, and salinity can be viewed via the website of the Virginia Estuarine and Coastal Observing System (VECOS).

Seed collection during the upcoming trials will be timed around the daily low tides. Collection trips will last 4-5 hours and boat transportation will be provided to the site from the public boat ramp in Oyster.

Volunteers must pre-register in order to participate. Registration forms are available by contacting Jen Dalke, volunteer coordinator, at 434-951-0572 or jdalke@tnc.org. Further details about volunteering are available on The Nature Conservancy  website.