The use of modeling and simulation tools—long a staple in the sciences—is now gaining ground in fields as diverse as agriculture, defense, health care, insurance, manufacturing, retail sales, sports, and transportation.

VIMS professor Mark Brush and graduate student Sam Lake, who develop and use computer models to better understand and manage coastal ecosystems, recently partnered with a team of Virginia teachers as part of a NASA-sponsored program to expand and enhance the use of modeling and simulation in high-school classrooms.

The ultimate goal of the program, says Brush, is to “give today’s students hands-on opportunities to work with modeling and simulation tools as a way to help them gain the science and mathematics skills needed for tomorrow’s highly technical workplace.”

The U.S. Department of Labor estimates that 15 of the 20 fastest-growing occupations projected for 2014 require significant training in the STEM fields of science, technology, engineering, and mathematics.

The NASA program—Simulation Based Engineering and Science Teacher Professional Development—recognizes that one of the best ways to engage students in STEM fields is to give their teachers opportunities to work with practicing scientists and engineers. Doing so increases the teachers’ content knowledge, exposes them to real-world applications, and helps bring the excitement of hands-on research into the classroom.

Lake, a Ph.D. student, is working with Brush to develop a computer model to study the interplay between nutrient pollution, low-oxygen “dead zones,” and climate change in Chesapeake Bay. He has twice been a fellow in the GK-12 program at VIMS, teaching for 20 hours per week during the 2010-12 school years in science classrooms at Yorktown High School.

Riddle is a 2012 winner of a prestigious Presidential Award for Excellence in Mathematics and Science Teaching, while Neff is the 2012 recipient of an educator of the year award from the Virginia Council for the Teaching of Mathematics.

Brush was invited to participate in the program by Behzad Raiszadeh, technical manager for the modeling and simulation initiative at NASA Langley in Hampton, and Dr. Thomas E. Pinelli, NASA Langley’s University Affairs Officer. Brush was selected for his expertise in ecosystem modeling—which includes work in Chesapeake Bay, along Virginia’s Eastern Shore, in the New River estuary in North Carolina, and in Narragansett Bay, Rhode Island.

Brush and Lake met with the teachers on five occasions—twice on the VIMS campus in Gloucester Point and three times at NASA Langley. The goal of their working sessions, says Brush, “was to develop lesson plans that incorporate modeling and simulation into high-school science and math classes.”

Brush says "The most exciting part of the program was seeing lessons emerge that demonstrate the connections between mathematics and environmental science, which will enhance STEM education and in the process expose Virginia students to one of the key environmental and economic issues in our state—the eutrophication of Chesapeake Bay."

Eutrophication—the over-fertilization of a waterbody due to the addition of excess nutrients such as nitrogen and phosphorus—leads to algal blooms that cloud the water and can generate dead zones when the algae die, sink, and decay.

The VIMS pair worked with Riddle and Cooper to develop a eutrophication-themed lesson plan that will allow students to study issues related to nitrogen use and pollution in Spotsylvania County, part of the headwaters for both the Rappahannock and York rivers, major tributaries of Chesapeake Bay. 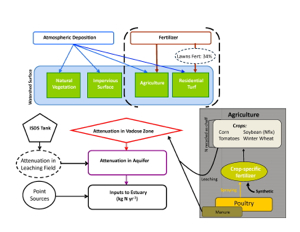 The lesson plan will allow students to use a computer model developed by Brush and colleagues to simulate how the release of nitrogen from farmland, residential communities, sewage-treatment plants, and other sources will impact local lands and waters, and how land-use decisions and “best-management practices” might reduce or increase these impacts. The students will approach the exercise as members of various stakeholder groups such as environmentalists, farmers, regulators, or watermen.

Riddle, who calls her experience with NASA and VIMS “a highlight of my teaching career,” says “Mark and Sam were valuable assets to us in that they have expertise in a content area other than mathematics, specifically environmental science. They were generous with their time and completed background work both before we arrived and while we were there. We had no prior knowledge of estuaries and eutrophication, but Mark and Sam were patient and answered every question.”

She adds, “Students are often not engaged in math class because they think the material is useless to them. I’m hopeful our students will enjoy this lesson because it connects mathematics to science content that is relevant to their lives.” 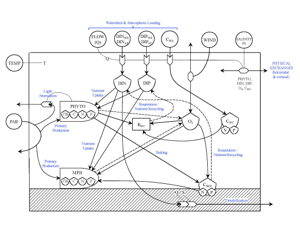 The other lesson plan, developed in collaboration with Neff and Dorton, will allow students to simulate the growth of phytoplankton in an estuary like Chesapeake Bay by controlling various combinations of temperature, light, and nutrients. The simulation is based on a model created by Brush and Lake for the York River. The lesson plan will fit into a larger unit that begins with an overview of marine science and nutrient pollution.

In addition to their use at Chancellor and Union high schools, NASA will make the lesson plans available on-line for use by high-school teachers throughout the U.S., adding to a bank of lesson plans generated by participating teachers during the previous two years. The program began in 2010, and has now served 78 teachers from throughout the nation at 4 different NASA centers—Langley, Ames Research Center in California; Kennedy Space Center in Florida; and Johnson Space Center in Texas.