Marine Science Day, the Virginia Institute of Marine Science’s annual open house, will take place on Saturday, May 19th from 10 am to 3 pm on VIMS’ bayfront campus in Gloucester Point.

Now in its 10th year, the popular event is offered free of charge and proceeds rain or shine. The goal of Marine Science Day is to give the public a behind-the-scenes look at how VIMS research helps protect and restore marine ecosystems in Chesapeake Bay and around the world.

The younger set will have the chance to learn with fun crafts and activities in the Children's Pavilion. Kids and parents will also have the chance to collect and observe organisms from the York River, and to tour the Institute’s Teaching Marsh, Shellfish Hatchery, and “Fish Library.” 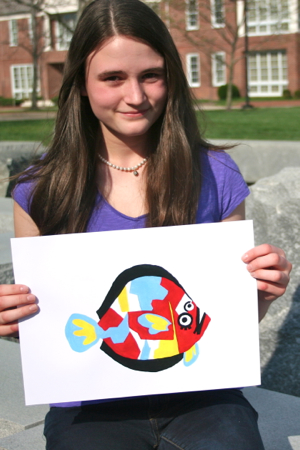 The Institute honors a different animal each year during Marine Science Day, with this year’s choice being the flounder. These remarkable creatures begin life shaped like most other fish, before undergoing a metamorphosis in which one eye migrates to the opposite side of the head and the entire body shifts orientation by 90 degrees.

Dr. Carol Hopper Brill, a VIMS education specialist who heads the children’s activity area at the event, says it will be “all flounders, all the time at the Kids’ Marine Science Pavilion!” Young visitors will be able to partake in a "Flounder Scramble," a "Flounder Camo Toss," and “Flounders on Foil,” in which they create their own color pattern for the camouflaged fish. They will also be able to practice the ancient Japanese fish-printing art of “Gyotaku” with flounder, and to create a “Flounder Frisbee," and “Flounder Flipbook.”

One new activity is an "Osprey for a Second" photo booth that will allow visitors to picture themselves as a chick in an osprey nest—in recognition of the VIMS “OspreyCam.” Participants will later be able to share their avian moment with family and friends via the VIMS website.

One of the event’s perennial favorites is the Parade of Marine Life, in which children and adults from around Tidewater walk through the VIMS campus wearing handmade creature costumes including seahorses, jellyfish, sharks, dolphins, and blue crabs. The parade is unique in that it passes right through the lobby of a building, something that even the vaunted Macy’s Thanksgiving parade doesn’t do.

In addition to these daylong activities, Marine Science Day offers a series of events that begin at specific times. These include 10-minute mini-lectures on flounder, shark bycatch, and the VIMS OspreyCam, a seafood cooking demonstration, and more. Details on these and all the other activities are available in the Marine Science Day program, which is available ahead of time at www.vims.edu/msd.

VIMS, one of the leading marine centers in the U.S., provides research, education, and advisory service to help protect and restore Chesapeake Bay and coastal waters worldwide. The Institute offers Master’s and Ph.D. degrees through its School of Marine Science, part of the College of William and Mary.