Professor Bob Diaz of the Virginia Institute of Marine Science has played a major role in a new U.N. report on low-oxygen “dead zones,” a growing threat to ocean life and marine economies in coastal waters throughout the world.

Diaz served as a chapter author, expert consultant, and reviewer of Hypoxia and Nutrient Reduction in the Coastal Zone: Advice for Prevention, Remediation and Research. Hypoxia is the scientific term for low-oxygen conditions.

The 87-page report, produced by the Scientific and Technical Advisory Panel of the United Nation’s Global Environment Facility (GEF), was released to the public during the 6th biennial International Waters Conference in Dubrovnik Croatia on October 19th. 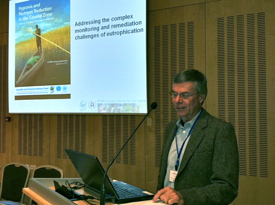 Diaz helped launch the report with a presentation describing his work in monitoring the spread of coastal dead zones, and how the results of his research can assist in efforts to restore ocean health. His talk focused on dead zones in international coastal waters, wherein management and restoration efforts require collaboration between two or more nations.

“It’s difficult enough to address dead-zone issues when the nutrient-rich runoff that underlies the problem comes from a single country,” says Diaz, citing the example of the dead zone that forms at the mouth of the Mississippi River. “It’s even more challenging when the runoff originates in multiple countries, as is the case with the dead zone that forms in the Black Sea. The low-oxygen conditions there are due at least in part to runoff from the Danube River, which drains 10 different European countries.”

Joining Diaz to release the report were GEF Program Manager Ivan Zavadsky, former Director General at the Ministry of Environment of Slovakia, and Dr. Meryl Williams, a member of the GEF Scientific and Technical Advisory Panel and President of the Policy Advisory Council for the Australian Center for International Agricultural Research. 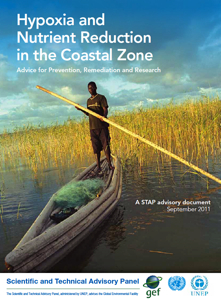 In addition to documenting the growing threat posed by marine dead zones, the report recommends methods to keep dead zones from forming in areas that are currently well oxygenated, to restore water quality within existing dead zones, and to identify the research needed to better understand dead-zone causes and impacts.

Diaz’s research—which informs much of the report—shows that the reported number of low-oxygen coastal areas has doubled in each of the last four decades, and that dead zones are now the key stressor on marine ecosystems, ranking with over-fishing, habitat loss, and harmful algal blooms as global environmental problems.

The GEF provides grants to developing countries and countries with economies in transition for projects related to biodiversity, climate change, land degradation, the ozone layer, persistent organic pollutants, and international waters. These projects benefit the global environment by promoting shared solutions to local, national, and global environmental challenges, and by promoting sustainable livelihoods.

The GEF International Waters program targets trans-boundary water systems, such as shared river basins, lakes, groundwater, and large marine ecosystems. To date, the program has provided more than US$1.2 billion in grants to 170 projects in 149 different countries. This investment has leveraged approximately US$5 billion in co-financing, and delivered substantive results that have subsequently been replicated and scaled-up in other areas around the globe.