Chesapeake Bay is the nation's largest estuary, with 15 trillion gallons of water. The Amazon River can discharge that much water in two days.

Professor Deborah Steinberg of the Virginia Institute of Marine Science will join an international team in late May and June for the first part of a three-year study of how the Amazon River's huge freshwater plume affects the biology and chemistry of the Atlantic Ocean. The $1.2 million project is funded by the National Science Foundation.

The ANACONDAS team—which also includes researchers from the Bigelow Laboratory for Ocean Sciences, Georgia Tech, San Francisco State University, the University of Georgia, the University of Maryland Center for Environmental Sciences, and the University of Southern California—will sail from Barbados in late May aboard the 279-foot RV Knorr for a 5-week expedition to the open waters of the western equatorial Atlantic, where the Amazon pours up to 11,000,000 cubic feet of freshwater into the ocean every second.

But an earlier study—led by members of the ANACONDAS team—revealed that levels of carbon dioxide in tropical Atlantic waters influenced by the Amazon plume measure 239 ppm, far below the atmospheric concentration. That led the researchers to suspect that a different food web was operating in the plume area—namely the type of "export" food web more typically found in nutrient-rich coastal waters.

During the upcoming expedition, the VIMS team—Steinberg, marine technician Joe Cope, graduate student Brandon Conroy, and recent William and Mary graduate Miram Gleiber—will deploy large nets at a series of sampling sites inside and outside the plume in order to collect and identify zooplankton from different depths. They will then use on-board and later laboratory experiments at VIMS to better understand what and how much the different zooplankton species are eating, and how much carbon they export though fecal pellets and other mechanisms. 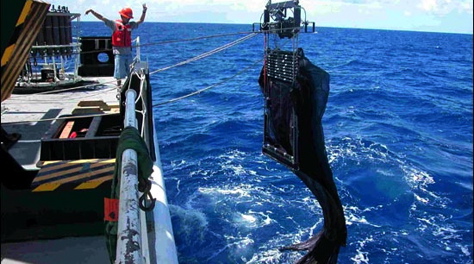 Their efforts will complement work by shipmates aboard the Knorr to further study the resident phytoplankton and bacteria; record levels of nitrogen, phosphorous, and other elements; map the plume's extent using satellite imagery; and measure how much and how fast carbon sinks to depth beneath the plume.

To follow along as the crewmembers blog about their experiences, visit the VIMS blog pages beginning in late May.