The workshop was sponsored by the U.S. Minerals Management Service (MMS), the federal agency responsible for managing oil and gas resources along the nation's outer continental shelf. 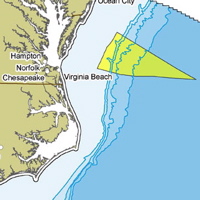 The workshop, Environmental Research Needs in Support of Potential Virginia Offshore Oil and Gas Activities, brought together more than 90 scientists, economists, and policymakers from throughout the U.S. to review what is currently known about the environmental resources of Virginia’s continental shelf, and to identify areas where more knowledge is needed in order to make informed decisions concerning possible oil and gas development. Existing knowledge includes results from a series of continental-shelf studies undertaken by VIMS scientists in the late 1970s following the 1973 oil crisis.

Consideration of oil and gas exploration on Virginia’s outer continental shelf is proceeding based on the convergence of three recent policy actions: a call for offshore gas exploration in Governor Kaine’s 2007 Energy Plan, the Bush Administration’s lifting this summer of an Interior Department ban on offshore leasing that was enacted in 1990, and the expiration on September 30 of the Congressional ban on offshore drilling (in place since 1981).

VIMS professor and workshop host Robert Diaz will collaborate with workshop participants to produce a report outlining the recommendations of five working groups. Those groups assessed current knowledge and suggested future research directions in the areas of socioeconomics, fish and fisheries, bottom-dwelling communities, geology and physical oceanography, and endangered species. The report is due to MMS in February.

The MMS is also seeking broader public input on the potential for offshore activities in Virginia, including publication of a Call for Information and Notice of Intent to Prepare an Environmental Impact Statement (EIS), which appeared in the Federal Register on November 13, 2008.

Any potential oil and gas activities in Virginia's offshore waters would begin with the sale of commercial leases in a wedge-shaped area (Lease Sale 220) that begins 50 miles off the Virginia coast.  The lease sale would take place no earlier than 2011.

The MMS seeks comments from all interested parties concerning environmental, archaeological, socioeconomic, and geological conditions or potential conflicts that should be addressed in the EIS. Comments are due to MMS by December 29, 2008.