Microplastics—tiny particles generated as plastics weather and fragment—pose a growing threat to ecosystem and human health. A new laboratory study shows these threats extend beyond direct physical or chemical impacts, revealing that the presence of microplastics increases the severity of an important viral fish disease.

Lead author on the study, published in Science of the Total Environment, is Dr. Meredith Evans Seeley, who conducted the research as part of her Ph.D. program at William & Mary’s Virginia Institute of Marine Science. Joining her as co-authors were VIMS professors Rob Hale, Andrew Wargo, and Wolfgang Vogelbein; W&M professor Patty Zwollo; and VIMS laboratory technician Gaelan Verry.

“Microplastics and pathogens are everywhere,” says Seeley, “but they’re often present at highest concentrations in densely populated aquatic environments such as fish farms. We wanted to explore if microplastics could affect the severity of IHNV infections in aquaculture.” IHNV is a virulent pathogen in salmonid aquaculture, affecting members of the salmon family including rainbow trout, steelhead trout, chinook salmon, and sockeye salmon.

The team wanted to determine if a “cause-and-effect” may occur between microplastics, virus, and fish mortality. Seeley and colleagues thus exposed aquarium-kept rainbow trout to low, medium, and high concentrations of three different types of microparticles, and later added the IHN virus to half the tanks. They chose plastics that are both widely used in aquaculture and commonly found as breakdown products in nature: polystyrene foam (often in floats, buoys, home insulation, and food containers); and nylon fibers (lost from fishing nets, fishing lines, and clothing). They also exposed infected and healthy fish to tiny fragments of the common saltmarsh cordgrass Spartina alterniflora. Control tanks held no virus or microparticles. Trout were hatched and reared  according to guidelines from the Institutional Animal Care and Use Committee.

Their results? “We found that co-exposure to microplastics and virus increased disease severity,” says Seeley, “with nylon fibers having the greatest impact. This is the first time this interaction has been documented, and emphasizes the importance of testing multiple stressors, which is more environmentally realistic.”

Dr. Rob Hale, an environmental chemist and Seeley’s doctoral advisor at VIMS, agrees. “Our results,” he says, “show we must consider toxicity of microplastics not just alone but in combination with other environmental stressors.”

Dr. Andrew Wargo, an expert in the ecology of infectious diseases, notes that IHNV is a worldwide issue. “It originated in the Pacific Northwest, where it continues to cause major problems for both salmonid aquaculture and conservation. Our study shows there is an interaction between microplastics and IHNV. What we don't know yet is how this interaction is playing out in aquaculture or wild environments, which will ultimately depend on the amount of plastic pollution and IHNV in any given area.”

Not all microparticles are created equal

Based on their laboratory results, the researchers suspect that exposure to microparticles increases disease severity by physically damaging the delicate tissues of the gills and gut lining, thus making it easier for the virus to colonize its host.

Exposure to synthetic microplastics—nylon and polystyrene—had greater impact than natural microparticles derived from Spartina. Most impactful was exposure to the nylon-derived microfibers. The researchers suspect this may be due to their larger size, extended length, or the greater hardness of the plastic compared to plant matter.

“Nylon microfibers are larger and may be more likely to become trapped in and damage the delicate tissues of the gills and gut lining,” says Seeley. “That could make it easier for the virus to enter and stress the host, ultimately increasing disease virulence.”

The team’s work has major implications beyond fish farming. “Our research question is very relevant in aquaculture,” says Seeley, “but it’s applicable to natural environments as well. Microplastics are distributed worldwide, so at any given time they may be co-occurring with a variety of natural pathogens.”

Seeley says the team’s results may be relevant to human health as well. “Indoor environments are dense with microplastics—in household dust for example,” she says. “This makes us wonder how indoor microplastic contaminants may affect the progression of airborne diseases such as COVID-19.” 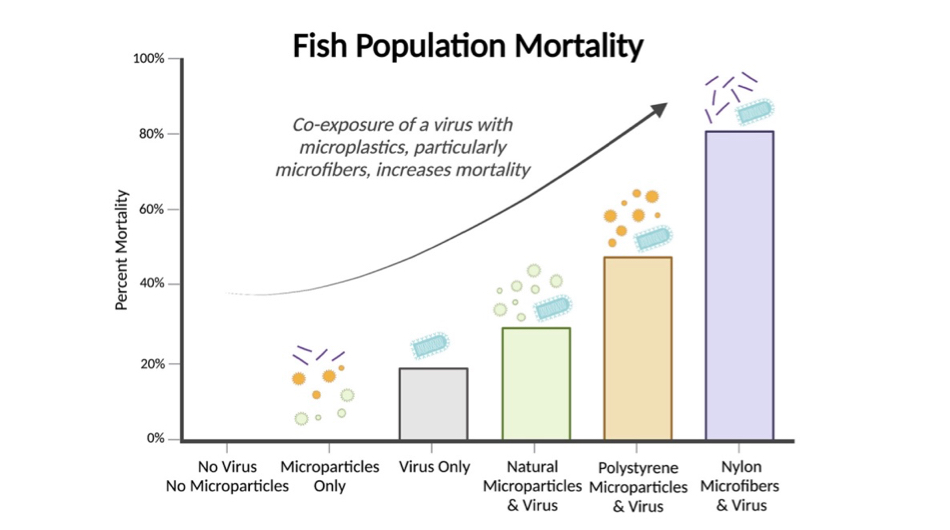 "We found that exposure of a fish to both microplastic fibers and a common virus can increase the risk of mortality by more than 4 times over exposure to the virus alone."