One Ocean. One Canoe. One People. That mantra describes the vision advanced by Native Hawaiian Nainoa Thompson, who will kick-off a Scholar in Ocean Residency at William & Mary’s Virginia Institute of Marine Science this fall with a weeklong visit to meet with local tribal communities, researchers, and students.

Thompson is Chief Executive Officer of the Polynesian Voyaging Society and a leader in the traditional Polynesian art of non-instrumented navigation who has helped lead canoe voyages throughout the global ocean guided only by stars, waves, winds, and marine life.

He last visited the Chesapeake Bay region in 2016 during the worldwide voyage of the Hōkūleʻa, the double-hulled voyaging canoe that has helped revitalize the art of traditional navigation since its launch in 1975.

The Scholar in Ocean Residency position, a first for W&M and VIMS, is the brainchild of Dr. Kirk Havens, director of VIMS' Center for Coastal Resources Management. Havens and Thompson became friends while paddling from Molokaʻi to Oʻahu in 1990, and rejoined forces during Hōkūleʻa’s Chesapeake Bay 2016 visit.

The year-long ocean residency, most done remotely and at sea, will coincide with Hōkūleʻa’s upcoming voyage, a 3-year, 40,000-mile circumnavigation of the Pacific Ocean whose goal is to inspire and educate youth to meet the challenges of a rapidly changing world. That voyage is known as Moananuiākea, the Hawaiian word for Pacific waters.

“As a scholar in ocean residence,” says Havens, “we’ve asked Nainoa to be a guide for engagement with indigenous cultures and to explore the idea of melding science with indigenous wisdom. He’ll be on campus in November to talk with students and faculty and staff, and to help local tribes connect to the Pacific voyage.”

“What's really important to us,” says Thompson, “is that while we’re focusing on our home when we sail the Pacific, we want to make sure that we also focus on other people's homes on the Earth. So we really want to create those relationships, those bridges to education and staying connected with the Chesapeake Bay and its communities.” One such bridge is the idea for a complimentary circumnavigation of the Bay shoreline led by local indigenous youth during the next few summers.

Dr. Derek Aday, VIMS Dean & Director, notes the residency meshes closely with the goals set forth in W&M’s recent strategic plan. “The overarching goals of Vision 2026 are to expand William and Mary’s reach, educate for impact, and evolve to excel,” says Aday. “Our partnership with the Polynesian Voyaging Society will contribute to all three goals and fits particularly well with the plan’s focus on finding innovative solutions to ensure the resilience of the world’s oceans, coasts, and waterways.”

Several other native Hawaiians will accompany Thompson during his November visit, including Lehua Kamalu, the first woman to serve as lead captain and lead navigator of the Hōkūleʻa on a traditional long-distance ocean crossing—the 2,500-mile ancestral “sea road” between Hawaii and Tahiti known as Kealaikahiki.

Nikki Bass, a Tribal Councilwoman of the Nansemond Indian Nation of the southern Chesapeake Bay, is particularly enthusiastic about Kamalu’s participation in the broader scholar in residence program.

“Bringing our cultures together will be wonderful,” says Bass. “I'm so excited for Lehua to be here because I've been working a lot on women’s role in environmental stewardship and our history on our waterways that has been forgotten. People often use the term Chesapeake Bay ‘waterman,’ and the stories of women on the water are left in the background.

Bringing that to the forefront, sharing a story of a woman as a navigator and her relationship to the water will be really inspiring to all our youth, but especially our young women.”

Also looking forward to stronger ties between the indigenous communities of Polynesia and Chesapeake Bay is Dr. Ashley Atkins Spivey, Executive Director of Kenah Consulting and a member of the Pamunkey Tribal Council. Kenah Consulting, which takes its name from the Powhatan Algonquian word for “thank you,” is a Small, Women-owned, and Minority-owned Business (SWaM) that supports communities across Indian Country to increase capacity, economic opportunity, and sovereignty. The SWaM certification program is a state program of the Commonwealth of Virginia.

“Education is a core mission of Nainoa’s work,” says Spivey, “and that resonates with us here because education is the whole point of the work I've done and in partnership with other tribal communities. And it's not just learning about what we're facing and how we need to face it but learning from our ancestors how to face it. And I feel like there is a huge disconnect, where the history of the work that we and our ancestors have done in fisheries and conservation hasn't made it to the youth. So education has to be a key component because if we don't know where these practices came from, in our relationship to the water and to the Bay, it's not going to have the foundation it needs.”

Building a foundation to carry indigenous wisdom into the future is indeed one of the stated goals of the Moananuiākea voyage around the Pacific, which aims to encourage a new generation of 10 million “Navigators”—fresh voices for indigenous communities and champions for planet Earth. To reach that lofty goal, says Thompson, will require a “third canoe”—a networked platform of communications and education initiatives to broadcast the need for ocean sustainability to audiences worldwide.

Local tribal leaders and VIMS educators are excited to help bring the third canoe to Bay waters. “There’s a lot of interest in programming that brings youth from different tribes together and gives them leadership and networking opportunities,” says Bass. “Kenah has also worked with our community, so we're excited to work with them on this issue as well.” VIMS foresees an important role in this effort through its existing educational and outreach programs, which include curriculum and professional development for K-12 teachers, the Bridge Ocean Science Education Resource Center, and a partnership with the JASON Learning project.

“The virtual canoe can carry us and carry you, can carry many other people,” says Thompson. “From our experiences with the Chesapeake Bay, it's easy to see how humanity hurts the Earth, and it's so hard to see humanity heal it, and it makes you cry. And we're so inspired by the work to heal the Chesapeake and want to be connected to that. People who circumnavigate their home will better understand it and share, because you can't protect what you don't understand.”

“We’ll have a seat in the canoe for everybody,” says Havens. “That's what we're working on now—a tribal connection to the voyage and this concept of one ocean that connects us all. If the Pacific voyage can inspire a Chesapeake voyage, can inspire a voyage in Australia, or somewhere else; if we can do that type of a connection through the virtual canoe concept, where everybody's linked and sharing their stories, that's the kind of vision we are hoping for.” 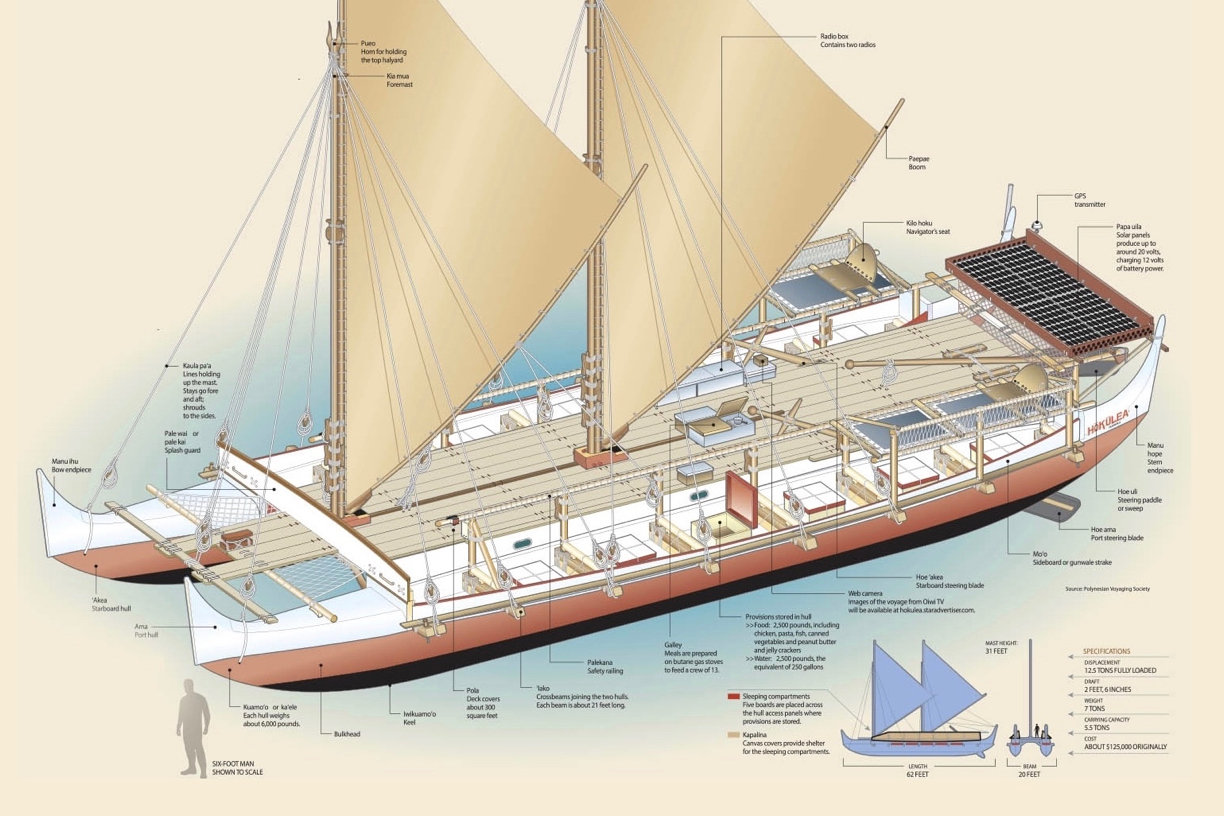