A team from the Glenns campus of the Chesapeake Bay Governor’s School (CBGS) won top spot during the 25th-annual Blue Crab Bowl on February 11-12th, reclaiming the title they won last year. Runner-up in a close contest was Norfolk Collegiate School’s Team A, while Broadwater Academy of Exmore took third and Chesapeake Bay Governor’s School-Warsaw took fourth in another intense competition.

The Blue Crab Bowl—held virtually again this year due to COVID safeguards—is the Virginia regional competition of the National Ocean Science Bowl©. The NOSB is an annual academic contest to test knowledge of the oceans among high-school students. CBGS-Glenns will move on to represent the Commonwealth in the national competition, facing other regional champions at the Virtual NOSB finals from May 6-15th. The theme of the 2022 Bowl and its regional competitions is Climate Change: Ocean Science and Solutions.

{{youtube:medium|US979U96Igk, This video by the W&M Studio for Teaching and Learning Innovation highlights each of the winning teams since 1998 in celebration of the 25th anniversary of the annual Blue Crab Bowl, the Virginia regional competition of the National Ocean Science Bowl©.}}

“All but one coach had participated in the virtual bowl last year,” Smith adds, “so they were better prepared to coach their teams through a virtual competition. We also made a few tweaks—we didn’t publish scores between rounds and allowed more teams to compete through elimination rounds. This kept all teams in suspense until winners were announced during the awards ceremony. By not knowing their place, teams were more competitive, and stayed engaged in the competition rounds throughout the day on Saturday.” 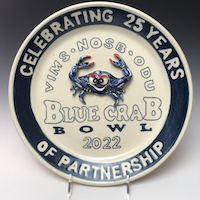 At the end of the event, all teams were recognized during a virtual Awards Ceremony by ODU Regional Coordinator Bill Dunn. The top four teams will receive a custom-made plate and mugs designed by Amy Lee Pottery in Norfolk. All students received prizes and coaches received science teaching resources and memberships in the Mid-Atlantic Marine Education Association.

The Blue Crab Bowl is a cooperative effort between VIMS, William & Mary, and ODU’s Department of Ocean, Earth, and Atmospheric Sciences, with the annual competition alternating between the two venues. More than 70 scientists, including faculty, graduate students, and staff from both institutions, the National Oceanic and Atmospheric Administration, and other organizations donated almost 600 hours of their time to ensure the success of this year’s event. 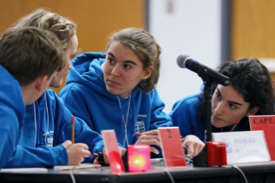 Smith stresses the unique nature of the partnership that has allowed the Blue Crab Bowl to flourish now for a quarter century. “I don’t know of many other cross-university collaborations that have maintained such dedication to co-hosting an event for so long across different university leadership, regional coordinators, and university personnel," she says. "This is truly a testament to the value that each institute places on the competition.”

Virginia’s Blue Crab Bowl was among the inaugural NOSB competitions in 1998. To date, the Blue Crab Bowl has involved 1,985 of the Commonwealth’s brightest science students from 61 public and private schools across Virginia. Smith says, “Using questions designed by marine scientists and educators, the contest tests students’ knowledge of oceanography, geology, biology, maritime history, and policy. The Bowl provides a forum for students who excel in math and science to receive regional and national recognition for their diligence and talent.” 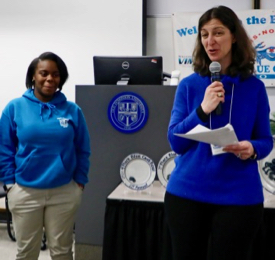 The National Ocean Science Bowl is a program of the Consortium for Ocean Leadership in Washington, D.C. NOSB seeks to interest students in ocean science as a college major and potential career. Through 25 regional competitions across the nation, NOSB provides an educational forum intended to generate student interest in the ocean sciences; improve awareness of our oceans, coasts, and Great Lakes; and create an “ocean literate” society that can meet the ocean challenges of the future. During 2022, thousands of students from hundreds of high schools around the country will participate in the 25th-annual NOSB event.

The Blue Crab Bowl is made possible by the generous support of national, regional, and local sponsors. Sponsors of the 2022 event include VIMS; Old Dominion University’s Dept. of Ocean and Earth Sciences; the VIMS Marine Advisory Services Program; Virginia Sea Grant; Amy Lee Pottery; Mid-Atlantic Marine Education Association; and Splendid Sands.com. For a list of the Consortium for Ocean Leadership’s national sponsors, visit the NOSB website at www.nosb.org/.