The reintroduction of seagrass into Virginia’s coastal bays is one of the great success stories in marine restoration. Over the past two decades, scientists and volunteers have broadcast more than 70 million eelgrass seeds within 4 previously barren seaside lagoons, spurring a natural expansion that has so far grown to almost 9,000 acres—the single largest eelgrass habitat between North Carolina and Long Island Sound.

Now, a long-term monitoring study shows this success extends far beyond a single species, rippling out to engender substantial increases in fish and invertebrate abundance, water clarity, and the trapping of pollution-causing carbon and nitrogen. 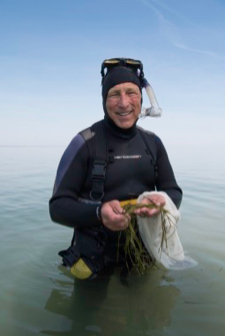 Published in the October 7th issue of Science Advances, the study was led by Dr. Robert “JJ” Orth of the Virginia Institute of Marine Science, along with VIMS colleagues Mark Luckenbach, Ken Moore, Richard Snyder, and David Wilcox. Joining them are Jonathan Lefcheck of the Smithsonian’s Environmental Research Center; Karen McGlathery, Lillian Aoki, and Matthew Oreska of the University of Virginia; and Bo Lusk of The Nature Conservancy.

“Human activities are degrading coastal habitats worldwide,” says Orth. “Our study serves as a blueprint for restoring and maintaining healthy ecosystems to safeguard multiple benefits as we move into an uncertain future.”

Orth and his co-authors stress that several of the restoration benefits—including removal of the greenhouse gas carbon dioxide via burial of carbon in seafloor sediments—were not even considered as management goals when the project began. These novel benefits provide additional impetus for future habitat restoration.

“Seagrasses play an important role in removing carbon dioxide from the atmosphere and sequestering it out of circulation for decades to millennia,” says McGlathery. “This is the first study to show how habitat restoration can make this happen and help combat climate change.” 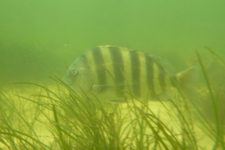 “A major challenge to restoration is determining what constitutes success,” adds Orth. “Traditional metrics have focused on habitat attributes such as plant biomass, coverage, or density. But the ultimate motivation is often not to restore the habitat itself, but the services it provides, benefits such as enhanced water quality, fisheries production, and now, carbon storage. As regulatory agencies worldwide seek to conserve and recover ecosystem services, our study shows that marine restorations are possible on scales that contribute directly to human well-being.”

Reasons for disappearance and recovery

Eelgrass flourished in the seaside bays of Virginia’s Eastern Shore until the 1930s, when a wasting disease and intense hurricane wiped them out. The research team lays out several reasons for the success of the subsequent restoration effort. 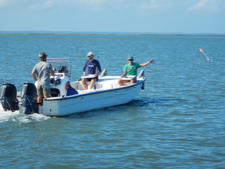 First is that natural recovery was precluded not by degraded environmental conditions but a lack of seeds. With no mature, seed-producing plants available within these isolated coastal lagoons, they remained almost completely unvegetated for more than half a century. In 1999, when Orth’s team began planting seeds and shoots collected elsewhere, conditions were ripe for recovery. A corollary, says Orth, is that in areas like Chesapeake Bay where turbidity, nutrient pollution, and warming continue to challenge eelgrass health, “we must identify the stressors that led to the problem in the first place, and then mitigate or compensate for those before restoration efforts begin.”

Second is the relatively large size of the seeded plots and the high seeding density. Field monitoring shows these factors helped jumpstart a positive feedback loop in which eelgrass patches grew sufficiently robust to dampen waves and stabilize seafloor sediments, clearing the water enough for sunlight to reach the plants for continued growth and natural seed production.

A third factor is the long-term commitment to the team’s annual seeding and monitoring efforts, supported by funding from NOAA, the Army Corps of Engineers, the Virginia Coastal Zone Management Program, the Virginia Marine Resources Commission’s Recreational Fishing License Fund, the National Science Foundation, the Keith Campbell Foundation for the Environment, and other public and private funders.

In the 21 years since 1999, scientists and volunteers have spent more than 3,500 hours gathering an estimated 10 million seeds from the coastal bays. They have planted these, plus more than 60 million seeds collected from harvested shoots, into 536 restoration plots covering roughly 500 acres. Continued seeding has helped the nascent eelgrass meadows survive the natural ups and downs experienced by any coastal ecosystem. 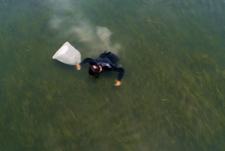 Lusk says, “The Eastern Shore community has provided a willing partnership to this protection, as we all rely on the surrounding waters as part of our economy and culture. Working side-by-side with hundreds of volunteers collecting seeds for this project is a highlight of each spring."

A fourth factor is the project’s location within the 40,000-acre Virginia Coast Reserve. Managed by The Nature Conservancy, the reserve has been under intensive study since 1987 as a Long Term Ecological Research (LTER) site administered by the University of Virginia. "The reserve protects one of the last stretches of coastal wilderness along the U.S. East Coast,” says Lusk. “As a result, water quality there remains exemplary, enabling the success of eelgrass restoration.”

Overall, says Orth, the team’s success “required a strong understanding of the causes of decline, repeated assessment of best restoration practices, and a sustained commitment to long-term monitoring and research.”

{{youtube:medium|K9NyfPLINtk, Seagrasses play a key role in the health of coastal waters worldwide. Follow along as VIMS and its partners restore and monitor these fascinating plants to ensure they continue to benefit marine life and coastal communities.}}

When eelgrasses disappeared from the coastal bays in the 1930s, so too did numerous marine organisms and seabirds that had relied on them for food and nursery habitat. One notable loss was the bay scallop—which until that time had supported a significant commercial fishery. 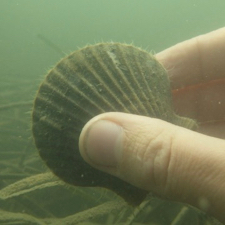 In 2008, several authors of the current study decided to build on their success with eelgrass restoration by launching a program to restore the tasty bivalves as well. They have planted young scallops from North Carolina into Virginia’s coastal bays each year since then.

Dr. Dick Snyder, director of VIMS’ Eastern Shore Lab in Wachapreague, reports that bay scallop populations have so far only returned to a fraction of their estimated historical values. He says “Our results to date suggest that further intervention may be needed to fully restore this species, including greater seagrass area and broader genetic diversity of the broodstock.”

One bright sign is the discovery of bay scallops in clam aquaculture beds more than 20 miles from where they are set out in spawning cages, suggesting natural dispersal of larvae via currents.

Dr. Mark Luckenbach, associate director of Research and Advisory Services at VIMS, says “A harvestable bay scallop population may be one of the ultimate measures of the overall success of our restoration effort, as has been the case for wolves in Yellowstone.” Luckenbach was director of VIMS’ Eastern Shore Lab in Wachapreague when the scallop restoration project began.

The authors caution that any eventual scallop harvest would need to be carefully managed to sustain the restored population.