The Virginia Institute of Marine Science christened its new flagship research vessel, the 93-foot RV Virginia, in a ceremony at the Yorktown waterfront on Friday afternoon. Public tours followed on Saturday. 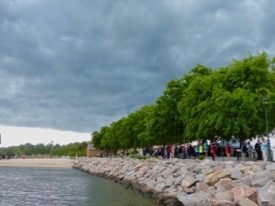 Apropos a research vessel designed to withstand high winds and heavy seas, the ceremony was accompanied by 40-mph wind gusts and intermittent downpours.

Virginia’s First Lady Pam Northam served as “vessel sponsor,” breaking a bottle of champagne as per long-standing maritime tradition as a large crowd of invitees and curious passersby looked on and cheered. An educator and environmentalist, Mrs. Northam has taken a leading role in Virginia to protect water quality and improve the health of the Chesapeake Bay.  Arriving from a different location than the Governor, the First Lady was able to skirt the storm squalls to make the ceremony.

"It was an honor to be part of this ceremony for such an exciting new chapter in VIMS’ impressive history,” says Northam. “We look forward to new scientific breakthroughs to increase our knowledge of the Chesapeake Bay and our ability to protect it for generations to come." 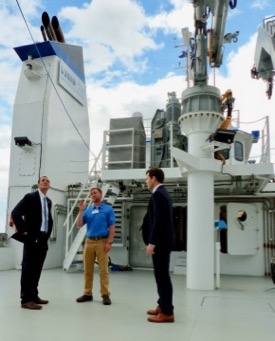 Prior to the ceremony, faculty, staff, and students from VIMS led ship tours and staffed displays highlighting some of the research that will take place onboard. The Virginia Choral Society followed the christening with an inspiring rendition of “Voice on the Wind" by composer Sarah Quartel, which one attendee called “an appropriate piece for the weather conditions!”

Harkening to W&M’s For the Bold campaign, Wells began his remarks by noting the Virginia “is indeed a bold vessel.” “Our unwavering commitment’” he said, “is to use the Virginia for cutting-edge research and education of unsurpassed quality in the Chesapeake Bay and its tributaries—just as we have been doing on other research vessels at VIMS for nearly 80 years.”

“Our plan, Wells added, “was to build a platform that would allow us to also move into offshore waters, spanning the entire East Coast and into the Gulf of Mexico. Innovation is for the bold, and innovation in the design and construction of the Virginia makes it arguably the most sophisticated research vessel in its size class in the United States.” 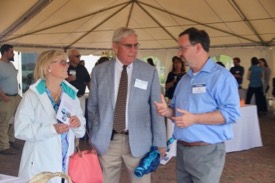 While Bradford described the bipartisan support that led the General Assembly to fund the vessel, Littel extolled the researchers and crewmembers that will truly allow the vessel to earn its expected return on investment. “VIMS has neat equipment—ships and drones” said Littel, “but what really makes it a jewel in William & Mary’s crown is the quality of its people.” 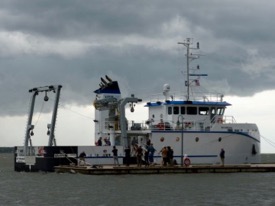 Wells concluded his remarks with special thanks to those who played especially important roles in helping to fund, design, and build the $10 million vessel. First were Delegate Chris Jones of Virginia’s 76th District, and Michael Maul and Scott Sandridge of the Department of Planning and Budget, who “recognized the importance of this vessel to the Commonwealth and communicated the value of the project in Richmond.”

His closing thanks were to the Virginia’s Captain, John Olney, Jr., Engineer Keith Mayer, and Mate Taylor Moore, who “spent weeks at the shipyard, helping bring the vessel to completion and learning its high-tech systems and handling capabilities during the sea trials.” He also thanked Carol Tomlinson, Gary Anderson, Todd Nelson, and Jim Gartland, who “each played a valuable role in technical aspects working tirelessly behind the scenes.”

A state-of-the-art platform for improved science and management

The RV Virginia will allow VIMS scientists to monitor and study the Chesapeake Bay and its marine life much more effectively than the institute’s previous flagship, the 65-foot Bay Eagle, and expands the institute’s research footprint into the open waters of the coastal Atlantic.

“The Virginia will for the first time allow VIMS researchers to match the geographic range of the fishes they study, many of which use the Chesapeake Bay as a summertime nursery and feeding ground while migrating far offshore at other times of the year,” said Wells during his remarks.

The Virginia will support VIMS’ Multispecies Fisheries Research Program and the Virginia Shark Monitoring and Assessment Program, among others. In addition to its fisheries capabilities, the vessel has the equipment required to perform bathometric and seismic surveys, deep-water plankton surveys, and coring operations. Its stern- and side-mounted cranes facilitate deployment of trawl nets and dredges, scientific buoys, and the new generation of robotic vehicles, both tethered (ROVs) and untethered (AUVs).

The vessel’s lab space—500 square feet in total—is divided into a wet lab for processing samples within a protected area, and a dry lab for conducting experiments with sensitive instruments while underway. Its electrical and networking systems were designed to handle the torrents of data collected by today’s high-tech field sensors and lab instruments, and with an eye to the even more voluminous data streams expected for the future. These features, along with the vessel’s engine and propulsion systems, combine to allow the vessel to operate more efficiently in terms of both fuel and cost.

When not in use by research teams from VIMS, the Virginia will be available for charter by external parties. The vessel offers opportunities for internal and external environmental research related to offshore sand and mineral resources, offshore energy, and dredging and maintenance of navigational channels.

{{youtube:medium|qMxFeKiwulw, Watch as the R/V Virginia plies the waters of the Chesapeake Bay. © D. Gong/VIMS.}}

Designed by JMS Naval Architects of Mystic, Connecticut, and built in Canada by Méridien Maritime Réparation, the Virginia replaces the 65-foot RV Bay Eagle, a converted oil-rig tender that has been in service at VIMS since 1987. The Bay Eagle will be retired after a year of side-by-side comparison tows to identify and correct for any bias in long-term monitoring results occasioned by the switch to the new vessel.

Homeport for the Virginia is the Ampro Shipyard & Diesel in Weems, Virginia, which offers a 50-ton crane for loading and unloading of large equipment and a host of other amenities. The shipyard lies on Carters Cove on the Rappahannock River, a major tributary of the Chesapeake Bay.

Learn more about the RV Virginia and its capabilities online at https://www.vims.edu/rv-virginia