Seven graduate students from the Virginia Institute of Marine Science received their diplomas in the company of family, friends, and faculty advisors during William & Mary’s commencement ceremony on May 11th. 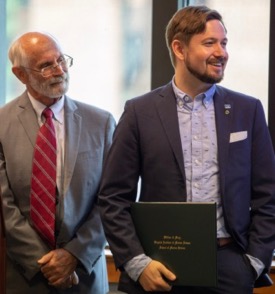 Dean and Director John Wells says, “VIMS alumni have an admirable track record of leadership in academia, government, and private enterprise, and I have no doubt that this year’s exemplary group will continue that tradition with service to the Commonwealth, the nation, and the world.”

In her remarks during the diploma ceremony, Professor Linda Schaffner, Associate Dean of Academic Studies at VIMS, 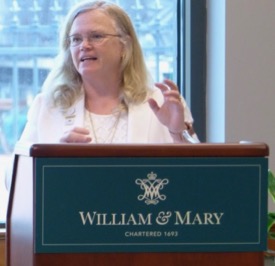 "You have a much harder time of it now than I ever had," said Close. "When I graduated, there was no... Facebook, Twitter, or Instagram. I did not have the added enormous pressure of social media against which to develop as an adult... I didn't have that insistent, seductive noise in my pocket and at my fingertips."

"This generation has faced unprecedented distractions," echoed Schaffner. "And your presence here today shows that you were able—with the help of advisors, colleagues, friends, and family—to focus in on a single body of work and persevere to its completion."

Schaffner added, “The School of Marine Science has a long history of producing outstanding scholars who have gone on to productive careers and significant leadership positions in science, policy, education, and the private sector. I’m sure this year’s students will continue that tradition, and help to advance both our field and the reputation of VIMS and the School of Marine Science.” 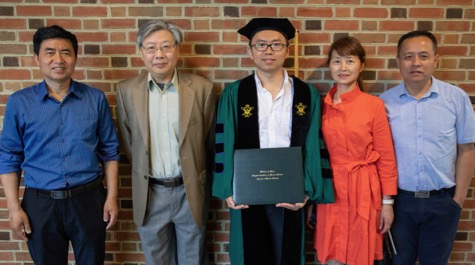 During their time at VIMS, members of this year's graduating class earned a number of fellowships, accolades, and awards. Highlights include

Including those who graduated in August 2018, this semester's commencement group—with 8 master’s and 7 Ph.D. awardees in W&M’s School of Marine Science at VIMS—brings the total number of degrees earned by VIMS students to 1,061—comprising 650 master’s theses and 411 doctoral dissertations. The first master’s degree awarded to a student studying marine science at VIMS was in 1943 and the first doctoral degrees were awarded in 1968.

Master of Science in Marine Science

Doctor of Philosophy in Marine Science

The following students graduated in August 2018 and did not participate in either the 2018 or 2019 graduation ceremonies.

Master of Science in Marine Science

Doctor of Philosophy in Marine Science