Unable to choose between two highly promising software prototypes, judges in the Virginia Institute of Marine Science’s “Crab Trap App” competition split the $2,500 award for first place, recognizing the efforts of both Varun Natarajan of Maggie L. Walker Governor’s School in Richmond and Jacob Ward of Walsingham Academy in Williamsburg.

Dr. Kirk Havens, assistant director of VIMS’ Center for Coastal Resources Management and driving force behind the contest, says “It was a tie for first place and both students earned a $1,250 award for their school. There’s no restriction on how the school might use the funds, though it’s hoped they would support their computer science or environmental science programs.” The prize money was provided by a private donor. 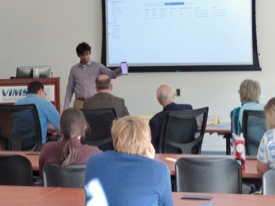 Havens and colleagues hit on the app competition as a way to give an affirmative answer to a question regularly asked by community clean-up groups—whether they can join the effort to remove derelict blue crab traps from the Chesapeake Bay. Scientists estimate that tens of thousands of crab traps are lost or abandoned baywide each year. Research shows these derelict traps both harm marine life and cut into watermen profits. 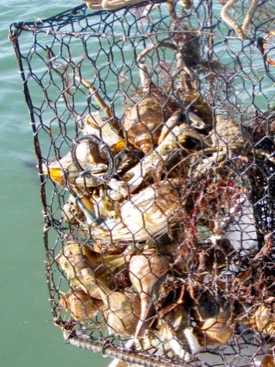 Introducing a competition to develop a “Crab Trap App” not only promised to give citizens a tool to assist in the derelict-trap issue, but also offered a real-world test for technically-minded students in Virginia high schools. The students’ presentations of their prototypes showed that they more than rose to the challenge.

“I was very impressed with both the students and their prototypes,” says Wells. “They had obviously put serious thought into addressing the design criteria, and their technical skills were remarkable.” 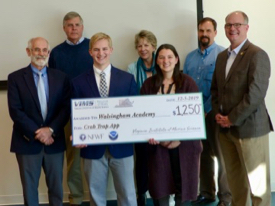 Ward said the most challenging aspect of the competition was the overall task of designing a user-interface that would allow citizens to record on their smart phones the location, date, and status of derelict traps.

Natarajan says, “It was the challenge of doing it. I had to make something that was convenient and also serves a very valuable purpose. When I arrived upon React Native and AWS I knew I had the right tools.” React Native is an open-source framework for developing mobile applications. Created by Facebook, it can be used to develop apps that run on different platforms, including Google’s Android and Apple’s iOS. AWS is Amazon Web Services, an on-demand platform for cloud computing.

Though Natarajan and Ward used different tools, their prototypes shared several common features, including the capacity to register users, 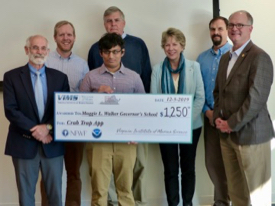 then give each user the ability to mark the location of the derelict trap; upload a photo or photos; record the number of any trapped crabs or fish; document whether the trapped animals are alive or dead, and whether trapped crabs are male or female; specify the trap type (wire or plastic coated); and enter any ownership information such as a buoy number. Natarajan’s app also allows users to upload their information to Google Maps, so that the public can view the success of the project in real-time.

Those interested in being notified when the app is ready for download can complete an online form. “Filling out the form,” says Havens, “will give us the information we need to notify citizens who are interested in removing derelict pots during the winter closed crabbing season. Once notified, they’ll be able to register to be part of the citizen clean-up program established in partnership between VIMS and VMRC.”

The project is supported, in part, by the National Fish and Wildlife Foundation.