The Virginia Institute of Marine Science has announced the winners of its 19th-annual photo contest, recognizing the most noteworthy images captured by VIMS faculty, students, and staff while conducting research in the field and laboratory.

This year’s grand prize winner was VIMS graduate student Andrew Corso for his photo of fellow student Jack Conroy piloting a small boat near Palmer Research Station in Antarctica. Corso captured the image in December 2017 during an expedition to Antarctica by members of Professor Deborah Steinberg’s Zooplankton Ecology lab. Corso, advised by Steinberg and Professor Eric Hilton, says Conroy’s six-month stay in Antarctica is crucial to the lab’s long-term study of Antarctic zooplankton, helping to put diet and population data from the team’s annual six-week oceanographic cruises into a broader seasonal context.

For this year’s contest, the selection committee awarded winners in categories best representing the most common types of images submitted during previous competitions. The committee is led by VIMS Publications Manager Sue Stein. 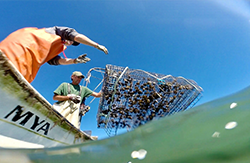 Robert Isdell ‘18, a postdoctoral research associate in the Center for Coastal Resources Management at VIMS, took first prize in the “Seascape/Landscape/Scenic” category for his photo of a colorful sunset captured from the mouth of College Creek in James City County, Virginia. A recent Ph.D. graduate from VIMS, Isdell previously studied the interactions between humans and the environment across coastal Virginia. 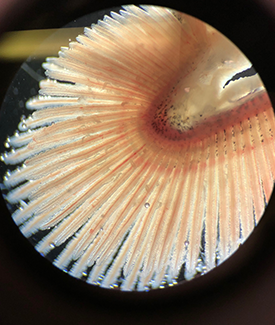 Shannon Retzbach, special events coordinator at VIMS, won the “Marine Life” category with her photo of an Atlantic ghost crab (Ocypode quadrata) camouflaged in the beach sands of Duck, North Carolina. Graduate student Amanpreet Kohli won in the “Microscopic” category for her exquisitely detailed photo of trematode parasites attached to the gill arch of an eel.

Stein says the large number of entries this year, 173 to be exact, contributed to the difficulty in choosing the contest winners. “I was greatly impressed by the submissions this year, especially the great subjects and landscapes captured,” she adds. “I greatly appreciate everyone's efforts.” As in previous years, staff in VIMS’ News & Media Services office use the submitted photos for publications, outreach materials, and website pages.

VIMS Dean and Director John Wells says he was also impressed by this year’s collection of submissions and lauds the “thorough representation of both the lab and fieldwork undertaken by VIMS scientists here in Virginia and around the world.”

To view high-resolution versions of this year’s winning entries, visit the VIMS Flickr page at http://bit.ly/vimspc2018.