Jim McInteer and his crew mate Alan Payne knew they had captured an oddity the moment they pulled their crab pot from the York River last Tuesday.

“We were excited about it,” says McInteer. “Alan yelled ‘Come look at this crab!’ He very carefully took him out of the pot and then I could see exactly what it was—I’d read about how they occur every now and then, so we knew what we had.”

McInteer, who at 73 has been crabbing commercially for 10 years and recreationally for decades, says he’s caught blue crabs “with blotches of white, and some other slight discolorations, but never a solid-blue blue crab.”

Recognizing its rarity, the pair donated the animal to the laboratory of Professor Rom Lipcius, an expert in crustacean ecology at the Virginia Institute of Marine Science. Although the crab—a male—has now died, marine scientist Gabby Saluta says researchers will keep the specimen frozen for possible study in the future.

“The blue color is most likely a genetic abnormality,” says Lipcius, “like in the bilateral gynandromorph.” The latter reference is to a rare crab shared with the Lipcius lab in 2005—this one split right down the middle, with its right half female and its left half male. 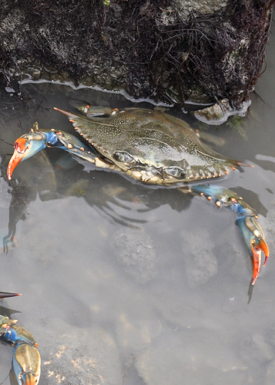 Lipcius says it's rare to find blue crabs that are completely blue—the last one reported to VIMS was in 2009—but he notes "they have been found previously, as have albino and purple crabs.” In a typical blue crab, only the legs are blue; the shell is beige. Female blue crabs have red tips on their claws.

VIMS Professor Jeff Shields, an expert in crustacean physiology and disease, says that purple coloration can be caused by a parasite that affects the muscles and shell. He has seen this several times in crabs from Chesapeake Bay. Shields has also seen a rare orange coloration that is caused by a virus. But McInteer’s "true-blue" blue crab appears to be a color variant and not an infection.

Says Shields, “This blue crab is most likely an extremely rare genetic mutation that has altered the amount of certain pigments in the shell, the crab’s ability to bind to proteins in the shell, or the number of pigment-producing cells in the skin beneath the shell.”

“We’ve seen a number of color variants in blue crabs at VIMS,” he adds, “but we’ve never seen this particular color morph in an entire crab. It’s definitely a rare beauty.” Previous color morphs include full albinos, half albinos, and mosaics—crabs with half their body one color and the other half another color. 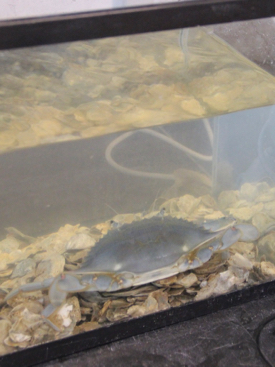 Shields explains that color in crabs and lobsters is a “feature of different pigments in the shell or cuticle plus the state of the pigment-producing cells in the underlying skin.” Scientists refer to these epidermal cells as chromatophores.

“The amount, type, and distribution of shell pigments is controlled by genetics and the chromatophores in the epidermis,” Shields says. “The main pigments are called astaxanthins, but there are many others as well. The astaxanthins give the carapace its dark green and blue hues, with deeper colors in thicker shells.” Shields says the dark greens and browns in a crab’s shell occur “when the astaxanthins bind to proteins within the cuticle.”

For seafood lovers who have wondered about the crimson color of the crab or lobster on their plate, he adds, “When a crab is cooked, these proteins cross-link, releasing the astaxanthins, which turn red when free of protein.”

Shields notes that the genetics of crustacean color have not been well studied. But, he says, “Rare color polymorphisms such as orange or bright blue lobsters, albino blue crabs, and this light-blue blue crab are probably caused by rare genetic mutations that alter the production and type of pigments in the underlying chromatophores.”

He also points out that crabs and lobsters can alter their color over short time periods. “They can’t match the rapid, mind-boggling changes that octopuses and squids can do, but crab chromatophores have circadian rhythms and often make the crab lighter at night and darker during the day.”

Shields says the juveniles of several crab and lobster species can also match the pattern of their environment.

“Color expression in juveniles has both a genetic component and a component that is controlled by the chromatophores," he says. "The variable colors seen in juveniles are thought to enhance their camouflage against visual predators, particularly if living in shallow waters where light penetration allows plant growth and the full spectrum of colors, so there may be adaptive selection for it to enhance survival.”