The VIMS Outstanding Professionals and Professional Faculty Administrator Award honors a continuing record of excellence, a singular outstanding performance, or both. 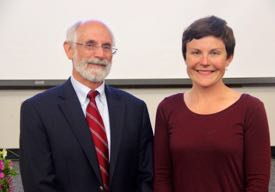 Jessica was hired in the Aquaculture Genetics and Breeding Technology Center at VIMS in 2012 as a Research Coordinator in a support role. In 2014, she became Manager in charge of the breeding program, and by 2015, she was named Assistant Director. Currently, she is in charge of all aspects of ABC’s shellfish breeding program and is the logistical hub of the entire operation. Her ascension to this level of responsibility is due to her independence, determination, intelligence, empathy, and leadership. 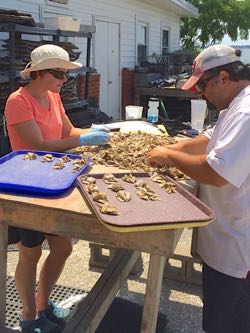 Jess has taken it on herself to learn everything she possibly can about the complicated and technical field of quantitative genetics. In addition to running the most diverse shellfish-breeding program in the world, her expertise has enabled her to be part of a team that will duplicate the ABC breeding program at the largest commercial shellfish company in the U.S., located in Washington State.

Jess is also exceptionally personable and treats all ABC staff with utmost respect while inspiring their best effort in the workplace, typically by leading through example. She is highly respected as a result. We cannot imagine anyone doing their job better than Jessica does hers, and are extremely gratified that she continues to lead ABC in its service to industry.