This year, staff at the Virginia Institute of Marine Science gave young visitors to Marine Science Day an opportunity to report on their experiences. The stories filed by these intrepid journalists wonderfully describe all the fun and learning that takes place during the Institute's annual open house, and reveal the reasons for the event's continuing popularity.

Dr. John Wells, VIMS Dean & Director, says "the reporters worked very hard by interviewing scientists and observing sea creatures throughout the day. They asked probing questions, and wrote some hard-hitting pieces of investigative journalism. We are proud to publish their work in our inaugural issue of the Marine Science Day News."

David Malmquist, Director of News & Media Services at VIMS, says he was particularly pleased that all members of the reporting staff were able to file their stories by their assigned deadlines. 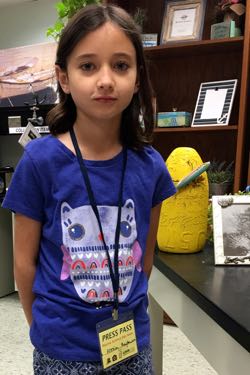 From the world of fisheries science, reporter Fresia Kaplan-Meynard was able to uncover how big kids are when compared to a sturgeon. She also discovered that when you have lots of baby striped bass they eat each other, so you have to feed them a lot. Staff writer Layla Rose gave a behind-the-scenes look at seining in the York River, and the many sea creatures that live there. Reporting on eels and other ocean animals was first-time fishing columnist Shamiya McCoy. Also reporting on these slithery fishes was investigative reporter Spencer Sipes. Among other interesting tid-bits, his front-line story reveals "that some eels can breathe out of water," and that "others look like rocks."

Crabs also proved a popular story topic. Reporter Christian Lewis discovered that "crabs have poise," and that "All crabs aren’t mean and 'crabby.'" Reporter Camille Phillips revealed the secrets behind crab molting, while colleague Chloe Phillips was surprised to learn that "the crab couldn’t bite me because… CRABS Don’t Have Teeth!" Reporter Amiyah Taylor explained the time-tested method for telling the difference between male and female blue crabs. The reporting team of Nicolas & Susana Jankovic inquired into the ancient world of a creature that—despite its name—actually isn't a crab, discovering that the "horseshoe crab is awesome!"

Heather Warbington, reporting from the world of shellfish, took on the age-old questions that swirl around oysters and pearls. "The world is your oyster, and you are the pearl,” she writes. "People say it all the time, but do they truly know what an oyster is? Do they know why we use that quote?" Read her story to find the answer!

Three reporters decided to work on human-interest stories featuring selected VIMS scientists. Alysson and Natalie presented a brief biopic of Research Manager Jenny Dreyer, including the discovery that her "favorite job is going into the water and getting the animals." Mariner Cope and Indy Sivaipram reported on scientist Joe Cope's exciting adventures in Antarctica, while Zinya Brown revealed the many responsibilities on the plate of Dr. Kirk Havens.

Reporting on how bioluminescence works was environmental reporter Walker Campbell. His reportage probed to the cellular level, revealing that "you have a special cell and when it bumps up against something the cytoplasm and nucleus light up or give off light." Travel writer Amelia Malone reported on her adventure at VIMS,  while encouraging local residents to visit the Gloucester Point campus for their own hands-on excitement.

"All of the kids remarked on how much they enjoyed working as a reporter and getting a chance to satisfy their curiousity by asking questions," says Malmquist. "If the experience sparked a greater interest in science or science communications among even one of our cub reporters, I think I speak for all my colleagues in saying we would consider the day a success."