Estuaries—where rivers meet the sea—are some of Earth’s most important habitats, providing nursery and feeding grounds for fish, re-fueling sites for migratory birds, flood control for coastal communities, and countless other benefits to wildlife and people. They are also under threat, from development, invasive species, rising seas, and other perils.

Last week in Williamsburg, Virginia, hundreds of scientists, educators, and coastal resources managers from around the nation met to discuss and plan how to monitor and preserve estuary health in light of sea-level rise and other challenges of a changing environment.

The attendees are members of the National Estuarine Research Reserve System, or NERRS, a state-federal partnership established in 1972 through the Coastal Zone Management Act. The 28 NERRS sites encompass more than 1.3 million acres along the nation’s coastline—from Chesapeake Bay to San Francisco Bay and from Florida to Alaska. The sites are managed on a daily basis by a state agency or university with input from local partners, with funding and national guidance from NOAA. 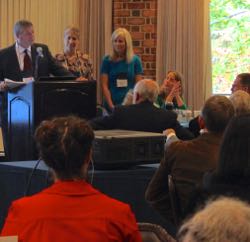 Dr. William Reay, CBNERR director and a VIMS professor, says the meeting “allowed our program sectors— research, education, training, and stewardship—to further develop and strategically plan for increased integration, efficiency, and impact at local, regional, and national levels.” He adds “By increasing our scientific understanding of user-driven issues, translating this information for diverse audiences, and engaging key partners and decision-makers, we’ll be better able to protect our natural resources and serve our coastal communities.”

Designated in 1991, CBNERR manages four pristine sites along the salinity gradient of the York River, from Sweet Hall Marsh near the river’s freshwater confluence, past the brackish environs of Taskinas Creek and the Catlett Islands, and down to the saltwater marshes of the Goodwin Islands near the river’s mouth. 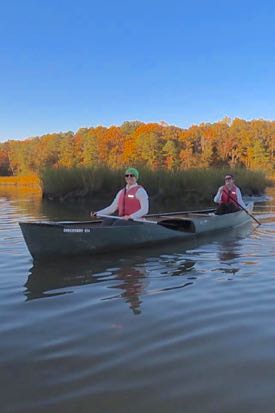 The weeklong meeting featured a number of training sessions, budget and planning meetings, sector meetings, a poster session, field trips to VIMS and two of the CBNERR reserve sites, and even a film fest.

Reay says a meeting highlight was the opening plenary, in which a quartet of academic and government leaders joined with attendees to explore how best to manage the economic and environmental impacts of a changing climate—most notably rising sea levels.

“We need more than ever to find ways to ensure that citizens understand the value of science in their lives,” said Wells. “We also need to use our long-term datasets to help gauge the impacts of human activity and global change on marine systems. These can’t be buried in tables and graphs in scientific journals, but rather must be insofar as possible publicly accessible in visual form. Open sharing is essential.”

Wells commended NERRS for their system-wide monitoring and sentinel-site program for climate change. “I'm very pleased to have CBNERR as a partner at VIMS,” he said. “They add a lot to our mission.”

Reveley described sea-level rise as “an interdisciplinary challenge of enormous proportions.” Noting that recent observed increases in Virginia’s coastal flooding show “the wolf is already at the door,” he said “it’s going to take most academic disciplines, corporations, government agencies, non-profit entities, and community groups coming together effectively to engage and deal with it.”

Ward reiterated the threats that sea-level rise poses for the Commonwealth, and described a number of bipartisan programs to improve coastal resiliency and restore Bay health—including efforts to conserve land, treat wastewater, and reduce agricultural runoff. “Our legislature gets it,” she said. “They know how important the Bay is to our way of life and economy.”

Callender brought a federal perspective to his remarks, and used the opportunity to commend NERRS staffers for their service. “I’d like to thank you for your continued dedication to the communities you serve," he said, "the immediate community where your reserve is located, as well as all the coastal communities that benefit from your research, education, and outreach.”

“The place-based nature of the NERRS system is a focal point,” Callender added. “Each reserve is essentially a community hub that brings together multiple disciplines, multiple perspectives that helps communities thrive in the face of their most pressing coastal issues.”