Professor Elizabeth Canuel of William & Mary’s Virginia Institute of Marine Science was awarded the honorary title of Geochemical Fellow at the annual Goldschmidt Conference recently held in Yokohama, Japan. Canuel is the first VIMS scientist to receive this international distinction.

The honor, bestowed annually by the Geochemical Society and the European Association of Geochemistry, this year recognized 11 scientists for their major contributions to the understanding of the chemistry of Earth’s land, ocean, and atmosphere. “It means a lot to me that my colleagues recognized my work in organic geochemistry in this way,” says Canuel.

In addition to five other Americans, this year’s recipients hail from China, France, Germany, and Taiwan. Previous honorees include Harold Urey, famous for his experiments showing how the precursors of life could emerge from non-living compounds, and Wally Broecker, who developed the idea of the global conveyor belt, a network of ocean currents that play an outsized role in Earth’s climate. 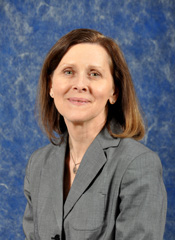 “Liz has been a leader in the field of aquatic geochemistry for many years,” says Dr. Deborah Bronk, Chair of the Physical Sciences department at VIMS. “It’s wonderful to see her many contributions recognized with this prestigious award.”

Paytan adds that Canuel is a “model citizen-scientist” as she is “committed to the scientific enterprise and motivated to represent her peers and their accomplishments” while giving back to her community, her institution, and scientific societies.

﻿The goal of Canuel’s research is to better understand the processes by which carbon moves between land and water, with a focus on its passage through floodplains, wet meadows, and coastal ecosystems such as salt marshes. These ecosystems occur worldwide and are very sensitive to the effects of climate change—including rising sea levels—but have to date been poorly studied.

In addition to receiving her award at the Goldschmidt Conference, Canuel presented the early results of a two-year research study undertaken with Amanda Knobloch, a Ph.D. student at W&M’s School of Marine Science at VIMS. Supported by NASA’s Carbon Cycle Program, the study focused on measuring the amount of organic carbon that moves between wetlands and estuaries at Taskinas Creek, a tributary of the York River in Virginia.

Canuel and Knobloch say their findings—part of a larger collaborative project including the City University of New York, the University of Maryland, and the Smithsonian Environmental Research Center—will help inform global carbon budgets and computer models, and help reduce uncertainties in the ability to predict the role of estuaries as a “source or sink” for atmospheric carbon dioxide.

The study also has served as Knobloch’s primary source of information in her Ph.D. studies. “I have been very fortunate to work with Dr. Canuel on my dissertation research,” says Knobloch. “She is an excellent researcher, and she pushes those in her lab to be their best, and to do quality research. Liz is the reason I came to VIMS, because I wanted an advisor who cared about their students and was working on innovative and exciting chemistry and who was willing to take the time to teach me new and different lab practices.” In addition to her mentoring of graduate students, Canuel was instrumental in the creation of a marine science minor for W&M undergraduates in 2010.

Canuel has been a member of the Geochemical Society since 2008 and previously served on its Board of Directors, as well as the Chair of its Organic Chemistry Division. In addition to this year’s honor, the Society invited Canuel to serve as chair of the 2016 Alfred Treibs Award Committee. The Treibs Award is the pre-eminent honor for lifetime achievement in the field of organic chemistry.

Canuel was previously recognized with W&M’s Thomas Ashley Graves, Jr. Award for Sustained Excellence in Teaching in 2014, W&M’s Thomas Jefferson Teaching Award (2006), and a CAREER Award from the National Science Foundation (1995). She received an Aldo Leopold Leadership Fellowship in 2011.