Members of the Rotary Club of Gloucester Point visited the Virginia Institute of Marine Science on March 27th to present a $5,000 check to VIMS Dean and Director John Wells. The funds will support the second year of a graduate student fellowship established by the club at VIMS in 2011.

The Rotarian’s annual fellowship gift honors J. Ernest Warinner, a fellow Rotarian who retired as an adjunct assistant professor at VIMS in 1991 after a 30-year career. Mr. Warinner, who passed away in March 2011, was an expert in the use of radioisotopes in marine research. These are unstable forms of elements such as carbon and nitrogen that can be used to trace biological and physical processes in nature. 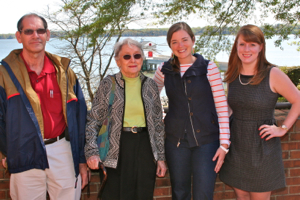 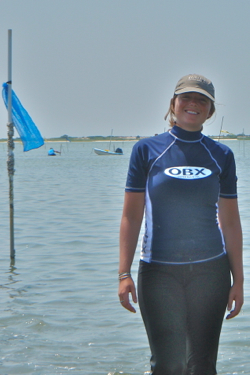 During the recent visit by the Rotarians and Warinners, 2011 fellowship recipient Annie Murphy described how her $2,500 in Rotarian support has aided her study of the ecological impacts and sustainability of clam aquaculture on the Eastern Shore of Virginia. Virginia’s hard clam industry is the nation’s largest, with total revenues in 2010 of $25 million.

Murphy says the fellowship funds were particularly helpful in allowing her to travel to the annual meeting of the Coastal and Estuarine Research Federation to present her preliminary results. “The CERF conference was a really important opportunity for me to get feedback from colleagues about the direction of my project,” says Murphy. 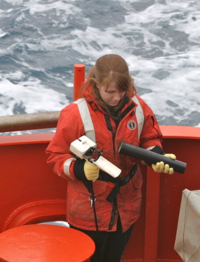 Fellowship recipient Anna Mosby described her study of phytoplankton growth in Antarctica’s Ross Sea. Phytoplankton, tiny floating plants that form the base of the marine food web, also play an important role in climate change by removing carbon dioxide from the atmosphere. Carbon that is exported to the deep sea via this "biological pump” contributes nothing to current global warming.

Rotary Club president Roger West says “We’re pleased to continue our support of research and scholarship by graduate students at VIMS, and really enjoyed learning about how the Warinner Fellowship has helped Anna and Annie to advance their studies of issues with both local and global importance. It’s a fitting tribute to Ernie’s lifework and accomplishments.”

VIMS Dean and Director John Wells says “we greatly value this generous support from the local community in honor of an individual who gave so much to VIMS, the Gloucester area, and the Commonwealth.”

VIMS is an independent state agency that with a mandate to provide research, education, and advisory service to the Commonwealth. The School of Marine Science at VIMS is a graduate school of the College of William and Mary.

The Gloucester Point Rotary Club is a chapter of Rotary International, a global organization of 1.2 million members and 34,000 local clubs that is committed to “Service Above Self.”