The Rotary Club of Gloucester Point has made a $5,000 gift to the Virginia Institute of Marine Science to honor emeritus professor J. Ernest Warinner and to support graduate student research and scholarship at VIMS.

The funds will be used to award a $2,500 fellowship to two deserving Masters’ or Ph.D. students in the College of William and Mary’s School of Marine Science at VIMS. 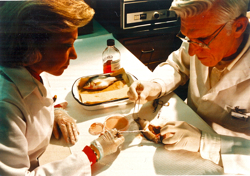 Rotary Club president Rodney Hockaday says “We’re greatly pleased to establish this partnership with VIMS in honor of Ernie, a beloved and valued colleague and fellow Rotarian. In addition to supporting graduate students at VIMS, we hope the fellowship will help VIMS students learn about Ernie and his many professional and personal accomplishments.”

Warinner, who received his Masters’ degree from VIMS in 1962 and retired as an adjunct assistant professor in 1991, is an expert in the use of radioisotopes in marine research. These are unstable forms of elements such as carbon and nitrogen that can be used to trace biological and physical processes in nature.

During his 30-year career at VIMS, Warinner worked closely with professor Beverly Anne Weeks and other colleagues in the Division of Chemistry and Toxicology (now the Dept. of Environmental and Aquatic Animal Health) to study the effects of chemical contaminants on marine life. Their work focused on how the highly contaminated waters of the Elizabeth River in lower Chesapeake Bay affected the immune system of local fishes.

Warinner also taught a course in the use and handling of radioisotopes to VIMS graduate students, and served as the Institute’s de facto Safety Officer.

Current VIMS professors Rob Hale and Mike Unger remember Warinner’s course, and their joint research, with great fondness. “He was a wonderful instructor,” says Unger, “the students really looked up to him as source of information on radionuclides and how they are formed in nature and degrade in the environment.” Hale adds “He is one of the nicest guys around, and was always there to help as an instructor and research colleague.”

Members of the Gloucester Point Rotary Club visited the VIMS campus on February 28 to present the check to VIMS Dean and Director John Wells, who says “we greatly value this generous support from the local community in honor of an individual who has given so much to VIMS, the Gloucester area, and the Commonwealth.”

VIMS is an independent state agency that conducts marine research today for a healthier tomorrow. The School of Marine Science at VIMS is a graduate school of the College of William and Mary.