by Erin Kelly |  December 19, 2013
The Virginia Institute of Marine Science recently recognized graduate student Mark Stratton as the recipient of the SunTrust Mid-Atlantic Foundation Fellowship for 2013-2014.

Stratton, a Ph.D. student in the College of William & Mary’s School of Marine Science at VIMS, received $2,900 in support of his efforts to improve fisheries management by incorporating new environmental and biological information into the assessment of fisheries stocks.

SunTrust’s fellowship endowment—created several years ago in the VIMS Foundation—offers funding for graduate student research at VIMS. This endowment will support VIMS students in perpetuity, and provide annual support to one or more students for many years to come. 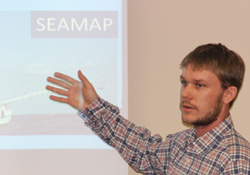 “I’m very honored to have received this fellowship,” says Stratton. “It reflects the strong emphasis that VIMS and donors like SunTrust place on supporting and enriching the educational experience for me and my fellow students.”

Advised by VIMS Professor Robert Latour, Stratton says the overall goal of his research is to “better understand how various environmental and biological factors affect abundance and diversity patterns of demersal fish and invertebrates.” He’s pursuing his studies in conjunction with two fishery-independent trawl surveys along the eastern U.S. coast, collecting data on fish diets as part of the Southeast Area Monitoring and Assessment Program-South Atlantic, and using existing datasets from SEAMAP-SA and its sister Northeast Area Monitoring and Assessment Program (NEAMAP) to investigate long-term trends.

SunTrust officials visited VIMS last week to hear a brief synopsis of Stratton’s research. David Burris, Virginia Peninsula President of SunTrust Bank, says “We’re very pleased to provide fellowship support to Mark and other graduate students at VIMS. The training they receive, and the work they do, helps us all to provide better stewardship of Chesapeake Bay and other waterways while enhancing the management of our marine resources. We’re fortunate to have this internationally recognized institution in our own backyard helping our community prosper.”

Stratton says that results from his research “will hopefully improve the general understanding of fishery-related ecological patterns in the important transition area between estuaries and the coastal ocean,” and “help lay a foundation for how we might incorporate environmental and biological factors into the assessment process for certain stocks.”

His research will also inform modeling and management efforts by the Atlantic States Marine Fisheries Commission (ASMFC), a deliberative body of the Atlantic coastal states that coordinates the conservation and management of 25 near-shore fish species.

SunTrust created the fellowship in the Virginia Institute of Marine Science Foundation, a nonprofit 501 (c) (3) organization that supports the education and research missions of VIMS. SunTrust has now supported a student during each of the past 6 years:


SunTrust Bank-Hampton Roads is part of SunTrust Banks, Inc., headquartered in Atlanta and one of the nation's largest banking organizations, serving a broad range of consumer, commercial, corporate, and institutional clients.

VIMS is an independent state agency with a mandate to provide research, education, and advisory service to the Commonwealth. The School of Marine Science at VIMS is a graduate school of the College of William and Mary.