A gift from the SunTrust Mid-Atlantic Foundation will support a unique study of the Chesapeake Bay ecosystem by Sikai Peng, a Ph.D. student at the Virginia Institute of Marine Science.

The $20,000 gift is the culmination of a 5-year, $100,000 commitment to establish an endowed fellowship for graduate students enrolled in the College of William and Mary’s School of Marine Science at VIMS. Part of the gift—$2,500—represents expendable funds for use by this year’s fellowship recipient. The remainder—$17,500—completes a SunTrust Fellowship Endowment Fund that now exceeds $87,500 and will help provide annual support to one or more students for many years to come. 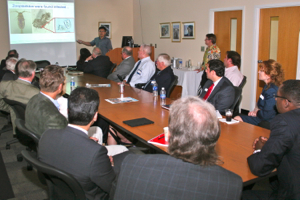 Peng, co-advised by faculty mentors Ryan Carnegie and Kam Tang, plans to use his funds to support studies of food-web dynamics in Chesapeake Bay. His research focuses on copepods—small crustaceans the size of a rice grain that form a key link in the Bay food web—and the even smaller “epibionts” that have been found to live on the body surface of copepods and other zooplankton.

SunTrust officials formally presented the gift during a meeting at VIMS in May. Bernard Ngo, City President SunTrust Bank-Gloucester, says “We’re very pleased to provide fellowship support to Sikai and other VIMS students. The training they receive, and the work they do, helps us all by providing a better understanding of Chesapeake Bay and the ocean for better management of our marine resources. We’re fortunate to have this internationally recognized institution in our own backyard.”

Peng gratefully acknowledges the SunTrust fellowship, saying he was honored to receive it and excited to put it to use. He’ll use his funds to purchase research supplies, rent boat time, acquire reference books, and travel to scientific conferences to share findings with colleagues.

The overall goal of Peng’s doctoral research is to develop genetic probes to detect and identify the different species of epibionts found on Bay copepods, to unravel their life cycle, and to better understand how these microscopic creatures might impact the motion, feeding, or health of their hosts—with follow-on effects on the Bay food web. His early results show that the number of epibionts increases with the length of their host, with the largest copepods accommodating more than 200 of the tiny protozoans. 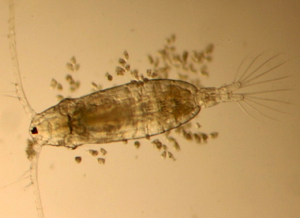 Peng says his study “will contribute to a better understanding of zooplankton population change and energy transfer in the Bay.” Decreases in the abundance or health of copepods due to the presence of epibionts could both increase the abundance of the tiny plants the copepods normally consume, and decrease the amount of food available to the fish that eat the copepods.

The 100-plus students currently enrolled in the graduate program at VIMS are engaged in cutting-edge research on topics as diverse as plankton dynamics, oyster genetics, seagrass restoration, nutrient pollution, beach erosion, fisheries management, climate change, and the population biology of blue crabs. VIMS graduates occupy leading positions in industry, academia, and government agencies at the local, state, federal, and international levels. The School of Marine Science at VIMS has produced more than 700 Master’s and PhD graduates since it awarded its first degree in 1943.

VIMS increases its international reach via formal partnerships with peer institutions around the world, including the Ocean University of China in Qingdao, where Peng earned both his Bachelor’s and Master’s degrees in marine science.

SunTrust made the gift to the Virginia Institute of Marine Science Foundation, a nonprofit 501 (c) (3) organization that supports the education and research missions of VIMS.  SunTrust has now supported a student during each of the past 5 years.

SunTrust Bank-Hampton Roads is part of SunTrust Banks, Inc., headquartered in Atlanta and one of the nation's largest banking organizations, serving a broad range of consumer, commercial, corporate, and institutional clients.

VIMS is an independent state agency with a mandate to provide research, education, and advisory service to the Commonwealth. The School of Marine Science at VIMS is a graduate school of the College of William and Mary.