The Virginia Institute of Marine Science recently celebrated the sixth group of interns to graduate from its Oyster Aquaculture Training Program during a reception on the Gloucester Point campus.

Created in 2009 by Dr. Stan Allen, Director of the Aquaculture Genetics & Breeding Technology Center (ABC) at VIMS, the “OAT” program runs throughout the oyster hatchery season—from April to September—and is built to teach the trainees the various stages of oyster aquaculture by rotating them through hatchery, nursery, and farm grow-out activities. 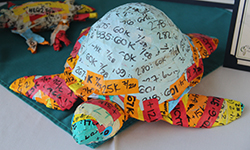 Funded by an anonymous donation to the VIMS Foundation, the hands-on program is designed to help meet the demand for trained staff in the oyster-aquaculture industry, and to assist the ABC staff in VIMS’ own oyster-domestication programs.

“The program was created to offer the interns a broad understanding of oyster aquaculture,” says Allen. “Since the very beginning, we’ve endeavored to teach them the skills needed to perform tasks in both oyster hatchery and field operations.”

VIMS Hatchery Specialist Amanda Chesler says OAT is a wonderful resource for those interested in getting their feet wet in the oyster aquaculture industry.  “Not only do the trainees gain six months of practical experience, but the program offers those already working in the industry a pool of qualified workers ready for employment immediately after completion,” she says.

Kim, a recent graduate of Old Dominion University, says he’s had his eye on the program for years, but felt he needed to wait until after he completed his undergraduate degree to have the time needed to dedicate to the program.

“I’ve been interested in oyster aquaculture for about five years, and found out about the OAT program about two years ago,” he says. “I’ve been waiting for the chance to apply to the program for awhile, so I was thrilled to be selected for it right out of college.”

While Kim says he will miss working in the VIMS oyster hatchery with the ABC staff, he’s looking forward to moving to the Eastern Shore where he’s landed a job at Cherrystone Aqua Farms. “I’m sad the program is over, but I’m so thankful for how many doors it’s opened for me.”

To supplement the experience gained by working in the oyster hatchery at VIMS, each of the interns completed off-campus externships to broaden their understanding and provide them with insight into the day-to-day life of an oyster farmer.

“The OAT program gave me the rare opportunity to learn first-hand what it’s like to own and operate your own oyster farm,” says Bethea. “That isn’t an experience that you come by easily, so I’m thankful to VIMS for getting my foot in the door.”

“All of us in ABC are very proud of this year’s interns because they’re all on their way to pursuing new career opportunities within the oyster aquaculture field,” says Chesler. “Now that they’ve completed the program, they’re leaving VIMS with the skills needed to successfully work as an oyster aquaculture professional.” 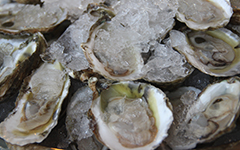 A graduate of the University of Maine, Wolfe has accepted a position at KCB Oyster Holdings in Lottsburg, VA where she will assist in their oyster production operations for the next year. “I hope to gain more experience in the field before going on to study bivalves in graduate school,” she says.

Bethea plans to return to North Carolina to continue to work towards his ultimate goal of starting his own oyster farm, while Murray is taking the experience she gained in the hatchery to Hawaii where she has accepted a position at a sea urchin hatchery run by the Anuenue Fisheries Research Center.

Tipton, the youngest of the trainees, just started his freshman year at Christopher Newport University where he’s majoring in biology. He says he plans to keep in touch with the ABC staff and continue to learn from them while he pursues his undergraduate degree.

“The overall goal of the OAT program is to give the trainees the skills necessary to work confidently in the oyster aquaculture industry, whether that means starting their own business or working in a commercial hatchery or farm,” says Chesler. “We’re looking forward to seeing the impact the trainees make on the field in the future.”

Funding for the Oyster Aquaculture Training program was made as a donation to the Virginia Institute of Marine Science Foundation, a nonprofit 501 (c) (3) organization that supports the education and research missions of VIMS.