The Virginia Institute of Marine Science recently celebrated the graduation of four emerging professionals who will be joining the ranks of Chesapeake Bay’s rapidly growing oyster aquaculture industry.

In September, the four trainees graduated the six-month Oyster Aquaculture Training Program (OAT) at VIMS.  The Program—funded by a private donor—was created four years ago by VIMS professor Stan Allen as the rise in local oyster hatcheries and farms increased demand for experienced and technical workers.

This year’s trainees were Nicole Dunleavy of Williamsburg, Marga Morris and Elyce Whatley of Newport News and Christopher Smith of Charlottesville.   They hope to continue the program’s exemplary success in placing its graduates, with each and every OAT alumnus so far having gained employment in oyster aquaculture—from algologists to farm managers.

While most aquaculture training program require participants to underwrite the cost of learning the skills needed to work in the field, the OAT Program is unique in that the trainees get paid to learn and – what’s more – get the opportunity work alongside the team from the Aquaculture and Genetics and Breeding Technology Center (ABC) at VIMS. 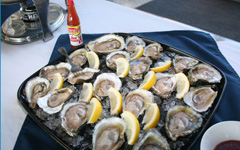 VIMS’ hatchery specialist Amanda Chesler says OAT is a wonderful resource for those interested in getting their feet wet in the oyster aquaculture industry.  “Not only do the trainees gain six months of practical experience, but the Program also offers those already working in the industry a pool of qualified workers ready for employment immediately after completion,” she says.

OAT participants learn a variety of skills in all areas of oyster aquaculture.  They work during the oyster hatchery season from April to September, rotating through various stages including hatchery, nursery and farm grow-out.

While in the hatchery, the trainees work on a variety of hands-on tasks ranging from spawning adult oysters, to caring for oyster larvae and algal cultures, and even to maintaining pumps and filters.  In the nursery, they learn the importance of density and water flow in VIMS’ upwelling systems.  While working on the farms, they cover site selection, density and growth rates, predator and fouling issues, and general maintenance of oyster bags, and cages.

Armed with an undergraduate degree in biology from William & Mary in 2008, intern Chris Smith knew he wanted to launch his career in the sciences.  He frequented the VIMS website thinking that graduate school might be a good fit for him—then became intrigued by the OAT program.

“I decided to look into the Program and do some reading about oysters, aquaculture, and the Bay in particular,” says Smith.  “There were so many things that appealed to me, especially being able to work on the water and potentially being able to start my own business growing oysters someday.”

Fellow trainee Nicole Dunleavy always knew she wanted to get into hatchery work, but always leaned towards lobster culture before participating in the OAT program.  “I knew nothing about oysters besides the fact that they were bivalves,” she laughs.  “It turns out that I really like oysters.”

Dunleavy found that she liked oyster aquaculture so much that she is about to make the cross-country move from Virginia to Washington State to work at an oyster hatchery—a job offer that she says came her way due to her experience at VIMS.

“The OAT program definitely prepared me for my future career endeavors and I know things now that I never thought I would learn,” she says.  “I learned how to actually grow algae the oysters depend on for their food, which is a skill that I am pretty sure got me the job at the oyster hatchery.”

Trainee Marga Mooris sounds a similar note saying, “My favorite part of the program was the algae room and being responsible for culturing algae—knowing that the oysters and oyster larvae depend on that to survive.”  Mooris hopes to work as a hatchery technician or an algae manager, saying that her next step now that she has completed the program is to get her name out there in the industry.

“The main goal of the OAT program is to give the trainees the skills necessary to work confidently in the oyster aquaculture industry, whether that is starting their own business or working in a commercial hatchery or farm,” says Chesler.

Intern Elyce Whatley is actively pursuing positions at various research facilities and believes that the program has definitely prepared her to be successful in the industry.  “The OAT program was beyond what I could’ve ever asked,” she says.  “I gained skills in hatchery operations, breeding, genetics—and got to go out into the field. This apprenticeship program surpassed all of my expectations.”

Chesler says many of the trainees who graduate from the OAT program have jobs lined up right when they leave.  “Some of the graduates find jobs working for major aquaculture companies, while others have started their own oyster farms,” says Chesler.  “We have even hired two former OATs to help with our oyster breeding program in the ABC program at VIMS.”