Winners announced in costume contest for Parade of Marine Life

The Virginia Institute of Marine Science’s tenth annual Marine Science Day open house on May 19th drew a large and enthusiastic crowd to Gloucester Point for a day of fun and learning.

Susan Maples, VIMS’ Public Outreach Coordinator, estimates that more than 2,000 people enjoyed a behind-the-scenes look at how VIMS research helps empower Virginians to protect and restore Chesapeake Bay and the coastal ocean. Attendees came from throughout tidewater Virginia and from as far away as Maryland, North Carolina, South Carolina, and Texas. 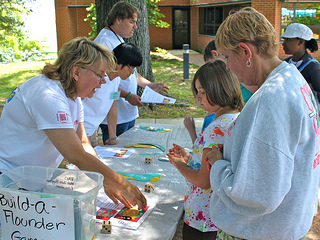 This year’s event—themed on flounder—provided guests with special opportunities to learn about these unusual flatfish and their adaptations for life on the seafloor. The younger set had fun learning with flounder-based crafts and other activities in the Children's Pavilion, including a flounder “Scramble" and “Camo Toss." They were also able to practice the ancient Japanese fish-printing art of “Gyotaku” with flounder, and to create a “Flounder Frisbee" and “Flounder Flipbook.”

On VIMS’ lower campus, kids and parents also got a chance to collect and observe organisms from the York River, and tour the Institute’s Teaching Marsh, Shellfish Hatchery, and Maritime Forest.

Photos from the "Osprey for a Second" photo booth will be available by Monday, May 28.

During the annual Parade of Marine Life, a perennial crowd favorite, children and adults from around Tidewater walked through campus wearing handmade costumes portraying flounder, a jellyfish swarm, a 4-person eel, a coral reef, a bryozoan, a boxfish, and seagrass, and other marine creatures. Even local canines took part, with a golden lab mix named Cara dressing as a “dog shark.” 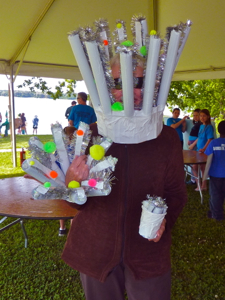 Winners of this year’s awards for best Parade costumes were

VIMS Dean and Director thanks the sponsors of Marine Science Day, who along with faculty, staff, students, and volunteers make the annual event possible.

A full list of VIMS' ongoing and upcoming summer outreach events are available on the "Public Programs" section of the VIMS website.