The Virginia Institute of Marine Science’s ninth annual Marine Science Day open house on May 21st drew a large and enthusiastic crowd to Gloucester Point for a day of fun and learning.

Susan Maples, VIMS’ Public Outreach Coordinator, estimates that nearly 2,500 people enjoyed a behind-the-scenes look at how VIMS research helps empower Virginians to protect and restore the coastal environment. Attendees came from throughout tidewater Virginia and from as far away as Maryland, New Jersey, California, Florida, and Arizona.

This year’s event, which was themed around seahorses, provided guests with special opportunities to learn about these winsome creatures and their adaptations for life in Chesapeake Bay and the coastal ocean. The younger set had fun learning with seahorse-based crafts and other activities in the Children's Pavilion.

Kids and parents also got a chance to collect and observe organisms from the York River, and tour the Institute’s Teaching Marsh, Shellfish Hatchery, and Maritime Forest.

A “Makin’ Waves” photo booth allowed visitors to picture themselves on a surfboard atop a wave—an image donated by world-renowned Hawaiian photographer Clark Little—while VIMS researchers provided information about the science of waves and their importance in moving seafloor sediments. These images are now available on the VIMS website at www.vims.edu/virtual_scientist.

In an entry on the VIMS Facebook page, local resident Bill Christensen gave “Many thanks to all the VIMS employees and students who volunteered their time… and helped make the whole experience such a success.” He wrote that it was a “Great outreach program for all ages.”

During the annual Parade of Marine Life, children and adults from around Tidewater walked through campus wearing handmade creature costumes including several seahorses, jellyfish, a hammerhead shark, a pearl-bearing oyster, a puffer fish, an auk, dolphins, and blue crabs. 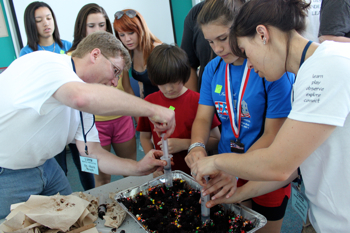 Winners of this year’s Parade costume awards will be announced next week.