Unlike last year’s event, postponed from its original date due to the threat posed by Hurricane Matthew, the 2017 edition was held on-time and under picturesque conditions. “With perfect weather in hand, we couldn’t have asked for a better day for this year’s event,” says Jennifer Dillon, VIMS Associate Director of Advancement. “We are appreciative of the teams who made the time to come out and support the VIMS Foundation.” This year’s event drew nearly 100 golfers. 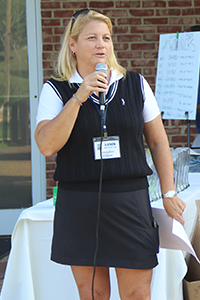 Dillon credits Bill Walsh of Yorktown-based Walsh Electric, and Peninsula ACG member, for the continuing success of the Mermaid Cup tournament. “Bill continues to be an incredible champion of VIMS in the Hampton Roads community, and through his work, we’ve been able to create lasting connections not previously available,” she says. Walsh attributes Kiln Creek’s central location as a big benefit for attendees and hopes to bring in more participants next year. “The course was in excellent shape with beautiful weather to boot,” says Walsh.

At the end of tournament play, attendees had the opportunity to speak with VIMS Ph.D. students Gail Schweiterman and Willy Goldsmith as they discussed their research topics. Schweiterman described her studies of how capture stress impacts cardiac function in sharks. “Most of my conversations centered on sharing what chemical changes happen in the body when (organisms) are hooked and held out of water, but we also discussed life as a graduate student, the Eastern Shore Lab facilities, and plans after graduation,” says Schwieterman. 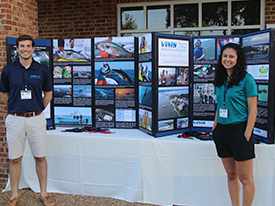 Goldsmith presented a photo essay describing how surveys he offers as part of his dissertation can reveal the preferences and values of recreational anglers fishing for Atlantic Bluefin tuna along the U.S. East Coast. “I really appreciated the opportunity to speak with supporters of VIMS research at the Mermaid Cup,” says Goldsmith. “I think folks were especially keen to hear about the broader potential impacts of my work—how it could impact both tuna and the people that fish for them—a testament to VIMS’ longstanding commitment not only to top-notch marine science research, but to advisory services.”

Schweiterman says attendees “appreciated getting a first-hand look at some of the research they’re actively supporting,” and hopes they will communicate what was shared to their friends and families.

Dillon says that events such as the Mermaid Cup help to increase awareness of VIMS’ research activities, as well as the benefits they bring to Chesapeake Bay, other marine environments around the world, and the people who depend on the sea for their livelihoods.

Walsh says “VIMS is still a well-kept secret around our Bay watershed…The more events like the Mermaid Cup we can encourage each year, the better for our beloved Chesapeake.”

Walsh specifically thanks longtime ACG member Dick Moyers, who is retiring from the association this year, for his continued support. “Dick helped steer the annual fundraiser toward VIMS and is largely responsible for getting the contractor community interested and excited about supporting the Institute,” says Walsh. “Dick is a treasure and we will all miss him dearly next year.” Walsh also mentions Paul Bollinger of W.M. Jordan Company, Rob Collins of Ritchie-Curbow, and Chad Gowger of Clancy & Theys for being “strong and active supporters” of the tournament and VIMS.

In looking to the future, Walsh says “mermaids all around our Bay watershed should be smiling more very soon!”