The Peninsula chapter of the Associated General Contractors (AGC) of Virginia hosted the 2nd annual Mermaid Cup golf tournament on October 27th at Kiln Creek Golf and Country Club in Newport News, in support of the Virginia Institute of Marine Science Foundation.

Originally scheduled for late September, the event was delayed due to the threat of Hurricane Matthew sweeping through Hampton Roads. The postponement may have been a blessing in disguise as the later date provided golfers with a pleasant and sunny day on the links.

“We couldn’t have asked for a more beautiful day to get out and enjoy the Kiln Creek Golf Course,” says Jennifer Dillon, VIMS Associate Director of Development. “We were pleased the delay didn’t hamper the enthusiasm and the turnout on October 27th.” The event drew more than 100 golfers. 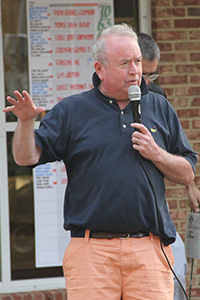 Planning for the tournament was led by longtime Peninsula AGC member Bill Walsh of Yorktown-based Walsh Electric. “Bill has been a longtime champion for VIMS and his passion for Chesapeake Bay and for VIMS is immeasurable,” says Dillon. “He works tirelessly to promote and share VIMS’ marine research with everyone who will listen.”

Walsh is particularly interested in efforts at VIMS to better understand how derelict crab pots impact the crabbing industry—research showing that removal of these “ghost” pots has led to an increase in crab harvests. “With Bill’s help, we have built relationships with many new friends that may have not been familiar with our work,” says Dillon.

Walsh says “VIMS is the best weapon the Bay’s ever had in bringing it back to good health. If you get behind VIMS, you’re really helping the science that helps the bay.”

Funds raised during the Mermaid Cup help benefit the VIMS Foundation, created in 2000 to support institutional needs, professors, and student fellowships, among other activities. 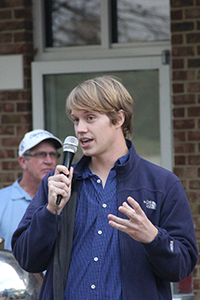 Following the tournament, VIMS master’s student Joseph Matt spoke on behalf of researchers whose activities are funded by donations to the Foundation. He delivered a Three Minute Thesis speech summarizing his study of the relationship between reproductive effort and mortality in supposedly sterile commercial oysters. “I was happy to share my story with our supporters and provide an example of all the important and exciting research at VIMS,” says Matt.

Dillon says events like the Mermaid Cup are also important for raising awareness among new audiences of the research conducted at VIMS—research that benefits Chesapeake Bay, marine environments around the world, and the people who depend on these environments for enjoyment and their livelihood.

Adrian “Casey” DuPlantier, Jr., a member of the VIMS Foundation and longtime supporter, believes that as the Mermaid Cup continues to grow, so will community awareness of research at VIMS. “I’m excited that [participants] are interested in the environment and what Chesapeake Bay does for this region,” he says. “The fact that they’re interested makes me really happy and shows we can do things that will get people more engaged in environmental issues.”

DuPlantier first became interested in VIMS' work in 2006 when he participated on a research trip to Antarctica alongside then-VIMS scientist Dr. Hugh Ducklow. “I got to experience some really interesting things that scientists are working on in that environment,” says DuPlantier, “and that really got me engaged in this type of activity.” As a result, DuPlantier has sponsored two VIMS students on research trips to Antarctica every year since 2008.

VIMS offers an additional thank you to Georgene Huggett of Poquoson, Virginia, whose quilt “Ocean Frolic” was on display at the tournament. Huggett created the quilt to honor VIMS’ 75th anniversary celebration in 2015.