The Massey Foundation of Richmond has committed an additional $500,000 to the Virginia Institute of Marine Science's 5-year capital campaign, doubling the Foundation's total contribution to $1 million.

The unrestricted endowment gift raises the VIMS Campaign total to $9.3 million, more than forty percent of the Campaign's overall target of $23 million. The Campaign began in 2002.

Massey Foundation Vice President E. Morgan Massey says that the gift is an "important step toward protecting the financial future of the Institute and placing it in a better position to respond to emerging issues that affect our marine resources. I am very pleased to have a part in this." 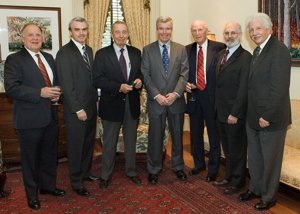 "As state funding declines, VIMS must diversify and build a substantial base of private support to guarantee its place among the world's leading marine science centers," says VIMS Dean and Director Dr. John Wells. "The Massey Foundation's generous gifts are a significant step in that direction."

Campaign funds will be used to purchase scientific equipment, support faculty and student needs, and generally assist VIMS in its research, education, and service missions.

The non-profit Massey Foundation was founded in 1957 by William E. and Evan Massey. Their sons E. Morgan Massey and William E. Massey Jr., serve as the Foundation's Vice President and President, respectively.

More information on the goals and status of the VIMS Campaign is available at www.vims.edu/campaign